The re-release of Celestia is now available! Spicy and the expansion Potion Explosion: Die fünfte Zutat are also available again! 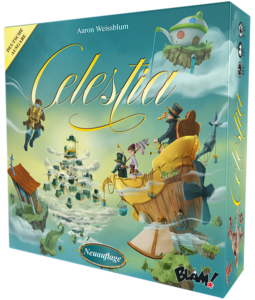 In Celestia you’ll board an airship together with a group of adventurers to travel through Celestia’s cities and find their breathtaking treasures. This journey is anything but safe. Nevertheless, everyone wants to recover the most valuable treasures and thus become the richest adventurer. 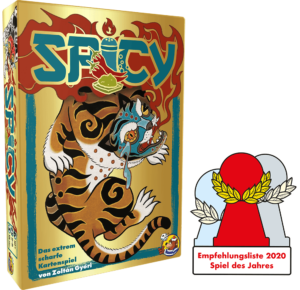 Spicy is also available again. In the bluff card game for 2-6 players, cards are played face down, so that you can sometimes fib when announcing your card. But this clever card game by Zoltán Győri is not just about bluffing convincingly. Because you can almost always play a card that is at least half right if you play it skillfully from your hand. It’s a matter of thinking tactically about which card you can get away with.

The Bluff game with 110 deluxe cards is available in our Shop or one of our Flagship-Stores for an MSRP of about 15€. 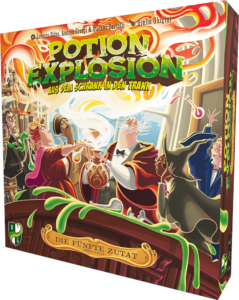 The Potion Explosion: Die fünfte Zutat expansion includes the new ingredient type “magic marbles”, which, together with the Spirit Cauldron board, allows you to change the composition of the ingredients in the dispenser, trigger longer chain reactions, as well as create more potions. The praise and blame markers open up new ways to get bonus or penalty points. For even more variety, you now have the Professor tokens, which change the basic rules of the game, and on top of that you get new potion bottles with four new special effects.

The expansion Potion Explosion from Horrible Guild is available in our Shop or in one of our Flagship-Stores for an MSRP of about 25€.

Those who want to test the games in advance can drop by our digital game nights on our Discord-Server and play the digital implementations together with our ErklärBEARs.