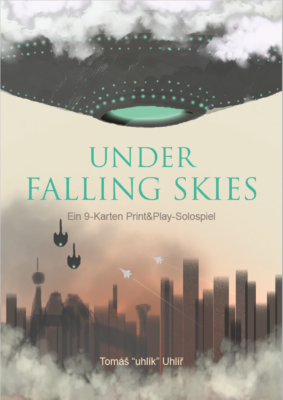 ALONE AGAINST THE ALIEN INVASION

Aliens have arrived to conquer the Earth. Enemy ships fill the skies. Humanity is retreating to underground bunkers located under cities around the world. Stand up to the common threat! Fight the invaders city by city. Assemble a team from around the world to save our planet and defeat the aliens!

What is UNDER FALLING SKIES: Wie alles begann?

For several years, Czech Games Edition (CGE) has been organizing game testing events in the former Czechoslovakia. They are usually focused on testing their prototypes. In doing so, they encourage participants to bring their own creations as well to get feedback from other testers as well as from CGE. A frequent participant was Tomáš Uhlíř (and you thought the name Vlaada Chvatil was hard to pronounce). He brought a prototype that was later published as Spring on a String (https://boardgamegeek.com/boardgame/276280/spring-string) .He also helped us organize various events on several occasions, and his observations on game prototypes were always constructive.ärken sollte, war er die erste Wahl. Glücklicherweise stimmte er diesem Vorschlag zu.

The part, the story, is known: His game won the competition in several categories: Best Solitaire Game, Most Thematic Game, Most Innovative Mechanic, and even Best Overall Game (https://boardgamegeek.com/thread/2126346/article/32055371#32055371) . But even before this happened, he had shown the game to CGE. They were skeptical at first, as they had never imagined publishing a solo game before. But how amazed they were at how much they then liked this game. And not just playing the game, but watching someone else play the game! This is always a good sign for the creators of CGE, and especially that they would like to work on the game themselves. So CGE has already spent many hours playing it themselves, and watching closely how others play the game.

But they wanted to be sure that they can really improve the game, because it should be more than just a nicely produced version with better graphics and components. And together with Tomáš, CGE actually found a way to do that…, but that’s another story and will be told another day.

But of course they started with a new print and game version and tested it and already changed it towards the new version. When the coronavirus situation hit and everyone was thinking about how to help, including CGE, it quickly became clear that they wanted to offer this print and play version with the new improved rulebook right away: And you can now download this new version from here:

How to play UNDER FALLING SKIES: Wie alles begann?

If you already have the old version, you only need the rules, they have been changed. Here are summarized all the changes that have made to this new version – consider it also as a kind of mini-FAQ:

Many players tend to play this rule wrong, so we decided to make it much more intuitive: You don’t set the energy to the value of the room, you add it instead.

Robots are probably the most challenging concept in the game, so we decided to make them less error-prone: place a robot immediately after clearing the blue (robot) space. (But you can’t use it again until the next turn).

Lower its value only when you decide to use it.

You can decide to remove the robot at any time.

When you use a robot, you can mark it by rotating the cube 45° to make sure you don’t use it more than once per turn.

Respawning enemy ships was the least exciting part of the round. And since a player usually had more options on where to place them, they had to do quite a lot of calculations to make a decision, which in most cases were not that important. So this part was automated as much as possible to speed up the game and allow the player to focus on the more important and exciting things.

Place all the green (respawning) ships first and only then the red (one-life) ships.

The ships are placed in empty columns if possible.

If each column has one ship, choose a starting point with the most empty spaces (rows) between it and the top ship in the column.

Only when there are more possibilities where to place the ship, you can choose.

Some of the above changes make the game a bit easier, and that’s actually great because it allows players who struggled with even the lowest difficulty to explore more of the game’s variability.

TIP: Even though it’s a solo game, we found that similar to a two-player co-op game, it was a lot of fun when you can consult together on what to do and how to defeat those pesky aliens.

This YouTube video explains the (new) rules in a clear way and with the help of an example game. TIP: turn on the subtitle, there is even the possibility on YouTube to display a (rudimentary) translation: https://youtu.be/cgE0gwTOptA

The beginning of the story

Ho Ho Ho and welcome to this year’s HeidelBÄRen advent calendar! Every day from Wednesday, 1 December until Friday, 24 December, a new door will open, in which many...
23. April 2021

Prevent the imminent attack of the aliens on PRAG! With PRAG you now have to protect the hometown of the creators of CGE – the city tableau is...