If you’ve been playing Through the Ages for a while, you’ve probably gotten used to the mix of leaders and wonders in the game. But there was probably a moment when some of you wondered – how did the game designer choose these wonders? And most importantly – why these particular people as leaders? Surely such an experienced author had very good reasons, right? Or did we miss something here? – This text might help you understand what’s behind it!

What is important to understand – Through the Ages was not created by an experienced author. And it wasn’t actually even developed “for publication”. At the time, I was designing various board games without any further plan for them, simply because I loved it, and then playing them with my friends. I was actually quite surprised when one of them, who happened to be a game publisher, said about one of them (“Arena”), “That’s good, I’d even publish that.” 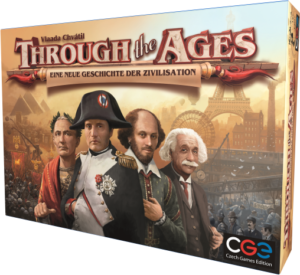 One of those old games was an epic civilization-themed game. No, it wasn’t Through the Ages (or as it was also called in German: “Im Wandel der Zeiten/Zeitalter”), the game mechanics were different – there were large territory cards (with tiny cattle, wheat, iron or coal symbols), players competed for these cards and placed small human tokens on these symbols, there were wooden houses (for laboratories, temples or libraries), and so on. But there were also familiar things – four ages, four types of units, science points to unlock new technologies, culture points that served as victory points, events that shook up the game, and more. And most importantly, there was a set of 24 great personalities, six per age. When an age ended, you would secretly choose one of them and use it later for a powerful single effect.

In developing the game, I just picked random historical figures that came to mind. I didn’t even know if the game would work. But I was playing around with everything at the time and wanted my prototypes to look nice. And since it was impossible to find pictures of all these characters in a similar style, I just personally drew a picture for each one.

Well, it’s been so many years, I don’t think I even had my own camera back then, so I don’t have any pictures of this game. But I dug deep in my old prototype boxes, found the cards and took a picture – as you can see I’m not kidding, you probably recognize most of these people … Sorry for the texts in Czech, but this prototype never existed in any other language. But at least you can see how old these cards are – they are from the time when using Comic Sans was not counted among the deadly sins yet!

Anyway, the game worked quite well, my friends loved it, but I was a bit unhappy with one or two parts of it. It wasn’t until a few years later that I returned to that prototype with new ideas – but instead of just replacing the problematic parts, I created an entirely new game around those new ideas. That’s the game you now know as Through the Ages.

Well, the truth is that the new game was also not created with the goal of publishing in my head. I just didn’t think that way, I had my profession that I loved (making video games!), and developing board games was just a very passionate hobby that rarely ended with a publishing contract for the local market.

So when I was looking for some great historical figures to try out these new ideas on, I didn’t hesitate – I already had a set of 24 hand-drawn portraits :).

Well, I only used 23. One of the original portraits was made specifically for a particular game mechanic (and its card[s]) in the first game (Freeing the Slaves), so I had to choose someone else. This is the story behind why Johann Sebastian Bach was the only leader without a portrait in the early prototypes of Through the Ages 🙂 .

So this random selection of characters from a prototype from “many many many years ago” made it into the other game prototypes from “many many years ago”. I then wrote some mechanics for those personalities, and my friends and I started playing with them … and we began to love the game, so that we were now actually considering its release, and we had already become so accustomed to the chosen leaders (and had especially already balanced their abilities relatively well) that no one questioned these choices anymore!

Today it would certainly be different – someone would probably notice the shameful lack of female leaders and a strong dominance of Western culture in the selection, but well, political correctness was not a thing here in the Czech Republic back then, and we were producing and releasing our first BIG game, so we had many other problems to solve. And besides – for us games were always about gameplay first and foremost.

So rest assured that there was no hidden agenda behind the choice of leaders for the game. There was just a young geek who sat down at his computer one evening near the end of the millennium and tried to remember 24 historical figures he remembered from history class in school to spice up a civilization-like game he was creating for his friends.

I hope you enjoyed this piece of old memories. Next time I’ll tell you a little more about the intentions behind the leaders and the miracles.

In the meantime, you can read some interesting things about selected guides and wonders from the expansion here. https://throughtheages.com/tta2/#cards (in English).

Originally published on blog.czechgames.com,
on 13th of May 2020.