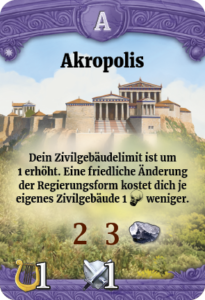 What’s even better than building a castle on a hill? Building the entire city on a hill, of course! This must have been exactly the thought of the pre-Mycenaean people when they decided to climb the limestone hills and build there their first temple city, which later became Athens. Later it was called Acropolis, which means “high city” and it turned out to be a really defensible place. The Acropolis was destroyed and rebuilt several times as new peoples and new gods gained sovereignty over this area. In the classical era, it received its iconic structures that we know and love today – the Parthenon Temple. The temple served as an offering of thanks to the gods for helping to defeat the Persians and is dedicated to the virgin goddess Athena, whom the inhabitants of this area considered a protector and mistress. But no temple endures long against concentrated cannon fire! The Turks experienced this when the city was bombarded by the Venetians in the 17th century. The entire Acropolis was shot to rubble on the hill, hopefully for the last time. This is the reason why the Parthenon we can see today is only the ruins of the former marble temple, but no less wonderful and thought-provoking than when it stood there in full splendor.

The Acropolis gives your civilization both its own advantage – strength for its well-defensible location and culture for the beauty of its architecture – and a symbolic one. It represents increasing importance of cities and their growth. And throughout the ages, the size of cities is represented by the limit of urban buildings. The larger cities are, the more they need and support the change to more evolved forms of government… which allow them to grow even more. The Acropolis was one of my favorite wonders, as it encouraged and rewarded a different style of play. Three Age A labs, then a low cost monarchy or theocracy, then another lab? We’re ready for Darwin. To grow your cities and change your form of government three times during a game? With the Acropolis, that’s not a bad idea. Five laboratories of the Age III with Sid Meier? Let’s build the Internet on top of that! And so on. On the other hand, it needed some customization steps to be competitive. Because once your opponents start the armor race you can rarely invest that much population in city buildings. Anyway, I think it ended well and the Acropolis is now a good and interesting choice in Age A. 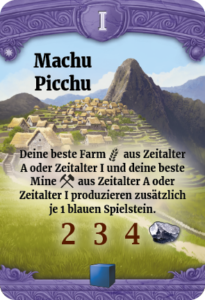 Machu Picchu represents the wealth of the Inca civilization in general. And the fact that it is limited to Age A and I mines represents the rather primitive foundations of the Inca empire. But don’t let that fool you, Machu Picchu is a powerful economic marvel – the Inca were able to build a truly impressive empire even though they had neither writing nor knew the wheel.

In the game, of course, its strength depends on whether you manage to grab iron or irrigation, or both. If it doubles your stuff from Age A presents an interesting decision – Should you upgrade your last primitive farm or mine until it’s in Age II just to increase production by 1? The Desolation of Time may help you with this dilemma, as Machu Picchu loses its importance as the game progresses. If you let it crumble it becomes a good tourist attraction, just like in the real world.

Interesting fact: Originally we considered introducing a native American leader, like Montezuma II. There’s always a problem with those, though – he feels like an ancient leader, but he was born later than Columbus, for example. We inserted him in Age I, but reflected that by giving him additional resources to build Age A things. Supported by the fact that he gave a bonus in terms of population, this was an interesting strategy at the beginning of Age I, but if he showed up too late his usefulness was quite limited. Therefore, he was eventually replaced by more flexible leaders and Machu Picchu was chosen to represent the culture of the natives of South America.

When we thought about Machu Picchu’s ability, we realized that it almost exactly fit the Wieliczka Salt Mines, a wonder from the Polish expansion of the first edition. We decided to try out how this ability worked in “the new story” and liked it almost immediately. For a moment I thought about keeping it as Wieliczka Salt Mines – when I was in Poland with my wife and kids we visited the salt mines and it was a fantastic experience. However, Montezuma was history by then and Cristo Redentor didn’t make the final selection either and it just felt wrong to ignore an entire continent. Polish players have Marie Curie in the game.

Harvard College was founded in 1636 and is the oldest institution of higher learning in the United States and also one of the most prestigious universities in the world. Originally called New College, it began with 9 students and one professor. It now has 10 faculties, more than 370,000 alumni from more than 202 countries, and the largest academic library in the world. Among its doctoral graduates are 49 Nobel Prize winners, 32 heads of state, and 48 Pulitzer Prize winners. That’s pretty impressive!
One of the school’s most famous landmarks is the John Harvard Statue, also called the Statue of Three Lies. The dedication describes that this is the statue of founder John Harvard and that the school was founded in 1638. But this is not a statue of John Harvard! The model for the statue was a student named Sherman Hoar, John Harvard was the first benefactor of the school not the founder and as we already know the school was founded in 1636. Pretty weird for a school whose Latin motto is “Veritas,” meaning truth, right?
And we have another crazy fact for you. Did you know that Harvard rarely appears on TV or in movies? The school banned all commercial filming on campus in 1970 because it received more than 5 film requests per week!

Harvard University was integrated into the game as a sign of science and education in Age II. Its stats and abilities are a mix of two different wonders from the expansion of the original game. The stats are fine and the ability to play an action card on the turn you get it can be very important, especially in the last turns of the game. Unless you forget to use this ability – players learn to think in a special way during the game and it’s not easy to break these patterns because of just one card.

I realized that this map may be controversial for those who like to argue which university is better. For example, “Why not Oxford, a university with a much longer tradition”? However, that long tradition was the problem. Oxford would belong to Age I and there we already have Universitas Carolina from the basic game. And why is this university a wonder, even though it is not the oldest, the biggest or the most famous? You know… because of patriotism. When I created the basic game, I wanted something Czech in it. I thought about a Czech leader – King Charles IV, the most famous and appreciated Czech ruler, who also recently won the national vote for the greatest Czech ever. (well, the enlightened guy named Jara Cimrman got even more votes, but he was disqualified by the jury because of the minor unimportant problem that he is only fictional. The Czechs sometimes don’t take things quite so seriously. Anyway, this means that the title of the greatest Czech of all time goes to Charles IV, who was actually more Luxembourger than Czech, but at least really lived.

Hmm, where was I? Oh, right, the universities. In the end, I decided to use Charles University (founded by the aforementioned ruler) as the Czech clue in the game. In the expansion, I topped that by adding Jan Žižka, one of the greatest… Hey, am I talking about Czech history again? Did I mention that I’m a wee bit patriotic? To get to the point, that’s the reason Oxford can’t be in the game.

Those who like Harvard should be happy that it is now in the game. And those who don’t like it should be glad that I’ve spent most of this text talking about fictional and historical Czech figures and not about Harvard. 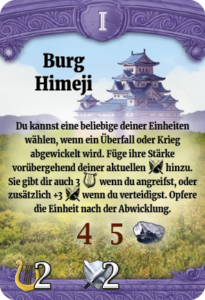 The samurai built a floating fortress above the city of Himeji. One of Japan’s most prized feudal castles, Himeji Castle stands proud and undefeated, towering over a population of half a million. The castle was built in the 14th century and rebuilt several times in between. The current architectural design is about 4 centuries old.
This military fortress also served as the cultural center of the area, where the activities of the nobles and your presence were concentrated. But don’t make a mistake, the military capabilities of this fortress are amazing. Taking Himeji Castle would not be an easy task. Before facing the high, sloping stone foundation of Himeji Castle, attackers would first have to traverse the gardens, which consist of winding paths, dead ends, and maze-like pathways. Perfect, then, for trapping enemies and taking them out from a safe distance from the loopholes hidden in the castle’s many towers. If they have previously managed to overcome the triple moat and the wall, of course.

While the bonuses for culture and strength relate directly to the stunning castle, the ability relates more to Japanese culture and warrior tradition as such – great devotion, code of honor, and willingness to risk one’s life in battle. Himeji Castle is one of the first wonders created for this expansion. Actually, the idea came right after the release of A New History of Civilization. Because what is one of the biggest differences between the original story and the new one? That’s right – sacrifice. In the original story, you were able to sacrifice any number of units to briefly increase your strength, both in wars and in aggression, both in attack and defense. This was a controversial mechanic, since the decision to sacrifice your units weakened both you and your opponent, and the only ones who benefited were those who had no part in the conflict at hand. We decided to keep this mechanic in the form of Himeji Castle as a reminder, but to tone it down a bit. We limited it to one unit and made it stronger, so the situations where it makes obvious sense to sacrifice units arise more often. While defending, the unit itself gets a big bonus. During an attack, for example in a war over culture, the 3 culture you get is equivalent to a unit being 3 stronger, but it doesn’t hurt your opponent as much. In any case, if your opponent owns Himeji Castle and is able to sacrifice a unit to make your attack ineffective, it is often enough for you to think twice about sending an aggression or war in his direction. Just as the devotion of the Japanese warriors prevented others from invading their homeland.