My husband Elwen and I work Czech Games Edition, where we test and develop games and organize playtesting events for future CGE titles. This year is special for us because the game we developed was also designed by us. It was really an adventure!

The game design of Die verlorenen Ruinen von Arnak has been an exciting journey and I think we will cover it in individual articles. But today I want to give you a little insight into the process of creating the Arnak world and its design, because I think it’s pretty special.

Elwen and I believe that Eurogames can be both sophisticated and thematically dense, which helps you intuitively grasp the rules. This was one of the goals we tried to achieve with Die verlorenen Ruinen von Arnak. We wanted to introduce a unique gameplay experience that combined workerplacement and deckbuilding mechanics with some additional surprises. We also wanted to give players the feeling of leading their own adventuring expedition in an unexplored land, and hoped that the game mechanics would enhance that feeling rather than diminish it. A big part of that feeling comes through the game graphics – which is why we paid a lot of attention to them. 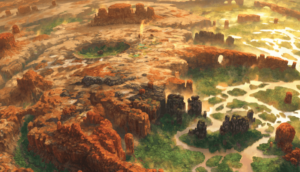 The entire world-building process started with the decision to place the game in an alternate history of the 1930s, where there is a mystical island to explore. Thus, we embarked on a journey to observe an ancient culture that rose from nothing, only to perish and be buried in the jungles of Arnak. World-building was a new experience for us and we never expected to go into so much detail already at the beginning.

I can’t reflect how lucky we were to assemble a team of incredibly talented Czech illustrators to work on this project. They all brought something unique to the mix and the results exceeded our wildest expectations.

In the beginning, we had many long conversations with our graphics team, discussing what the island would look like and who the inhabitants were who once lived in Arnak: their way of life, their beliefs, their history and the art they left behind. 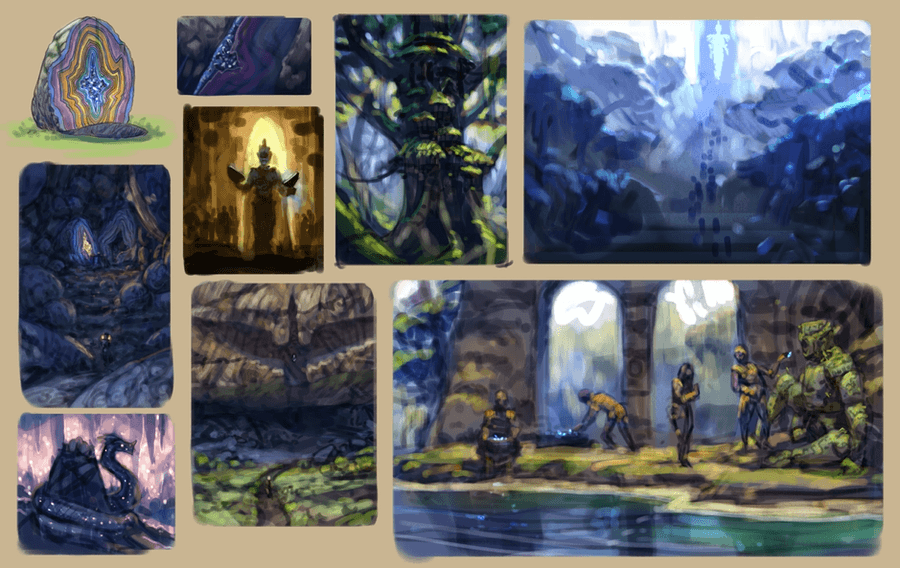 The history of Arnak

I started writing a very long document called “Geschichte von Arnak” zu schreiben, while Ondřej Hrdina started sketching scenes from the past. This was one of my favorite moments of the process – being inspired by the drawings while writing or seeing my thoughts take shape in the illustrations.

We knew we weren’t creating a design that we would use in the real game, but I hoped that the attention to detail would make the place seem more real and that these designs would serve as cornerstones for us to continue creating the world of Arnak.

Our team members Jakub Politzer, Filip Murmak and Ondřej Hrdina were indispensable when discussing the civilizations native to Arnak and their history. They offered us valuable information about the steps we took while creating the world, as well as great ideas and valuable feedback.

We kept adding details (and drawings! ); we described an island and its geography, climate, fauna and flora; and we described people who once lived in Arnak, their myths, way of life, materials, technologies used, architecture, trade customs…. The list became longer. 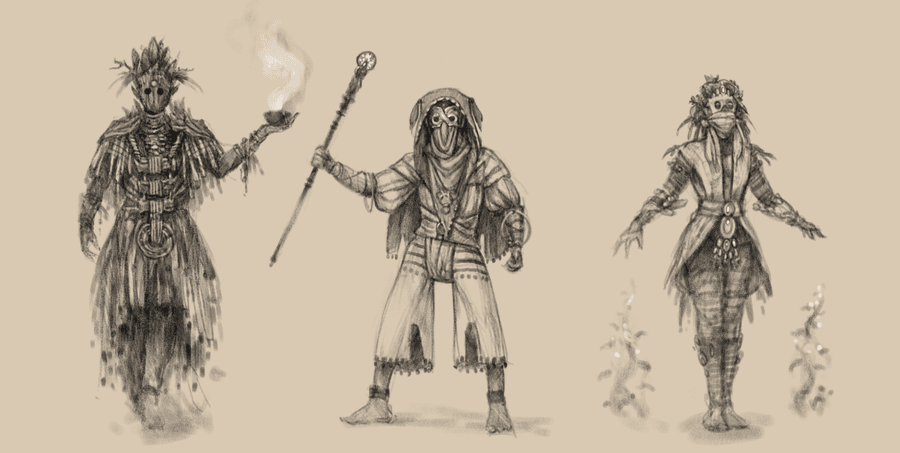 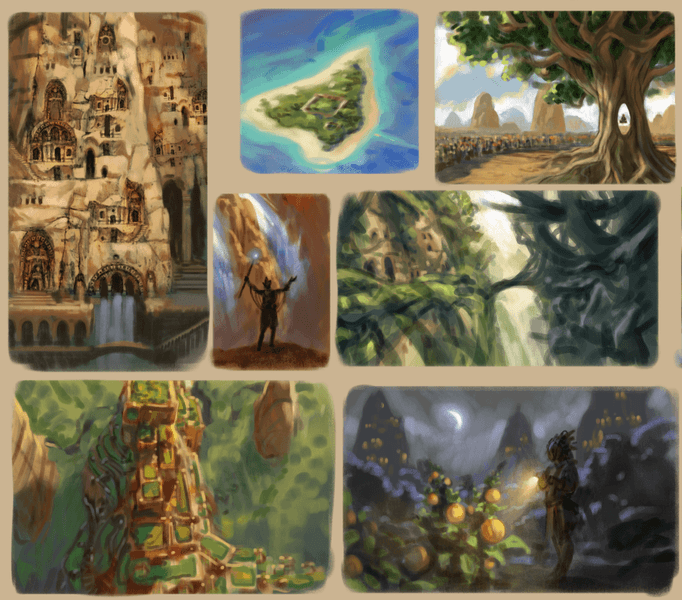 The mythology and religion was an important part of the culture and you can see this reflected in the art they left behind: The artifacts you find, the places you explore, the stories depicted on the walls of the lost temple,… 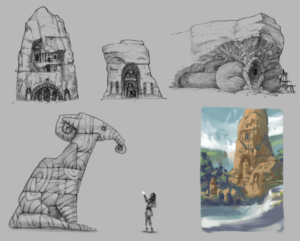 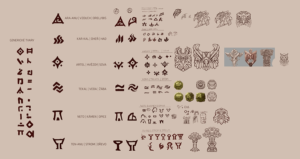 Jakub Politzer led a part of the process that I found fascinating: How oral stories morphed into myths, myths morphed into drawings, and drawings morphed into symbols that the inhabitants of Arnak use to write their sacred texts – symbols that are in turn later found in their architecture and artifacts.

This eventually evolved into a hieroglyphic script, which can be found sporadically on graphics throughout the game.

I promised a glimpse. If you want to dive deeper into the meaning of the different drawings in the game, here is a link to some of my notes: Mín’s notes. 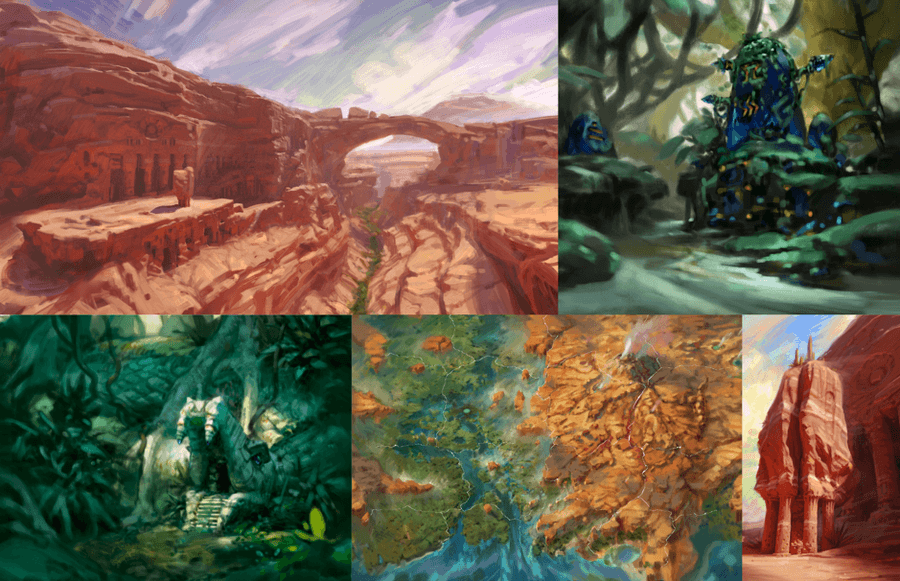 After months of this work, Arnak with all the small details felt alive to us. That was the moment when our real work on board game graphics began. We had to let centuries pass, bury everything we knew and start seeing the island through the eyes of incoming explorers who wanted to uncover Arnak’s great mysteries for the first time.

Finally, Ondřej Hrdina began to design Arnak as it would be found by researchers. The ancient temples and cities, all in ruins, overgrown and deserted. The jungle greedily reclaimed everything that was left behind, hiding statues and sacred cities.

We decided to keep the two main habitats on the map: The vast, rocky plains, where the most efficient means of transportation is an all-terrain vehicle, and the vast river delta surrounded by dense jungle, where the ideal way to get around is by boat – although, of course, you can get anywhere by seaplane! 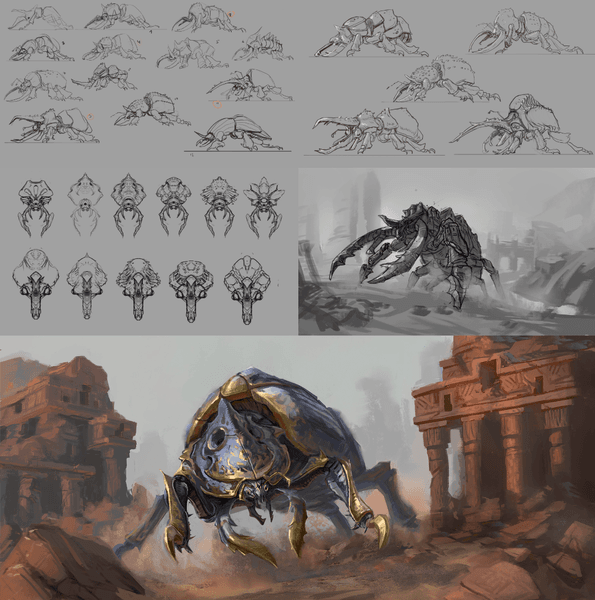 Jiří Kůs and František Sedláček joined our team and were given the task of drawing and working out the design of the ancient guardians. These mysterious beasts lurk in abandoned cities and explorers who disturb their peace must brave their wrath or find a way to appease their fury. On the left you can see the birth of a Guardian, from the first sketches to the final illustration. 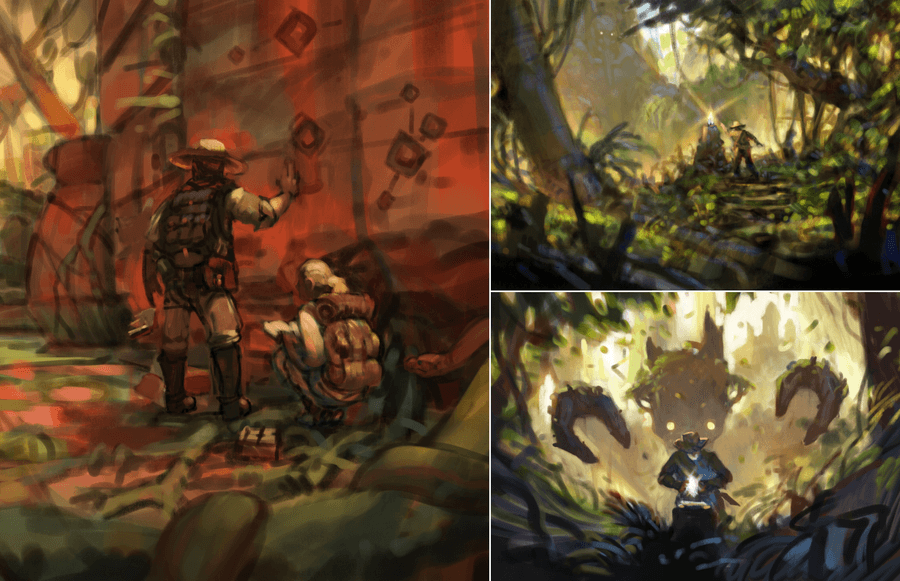 Ondřej Hrdina has additionally gathered some drawings of explorers making their first discoveries … and encountering Guardians for the first time. One of these drawings eventually evolved into the cover image of the final game box. 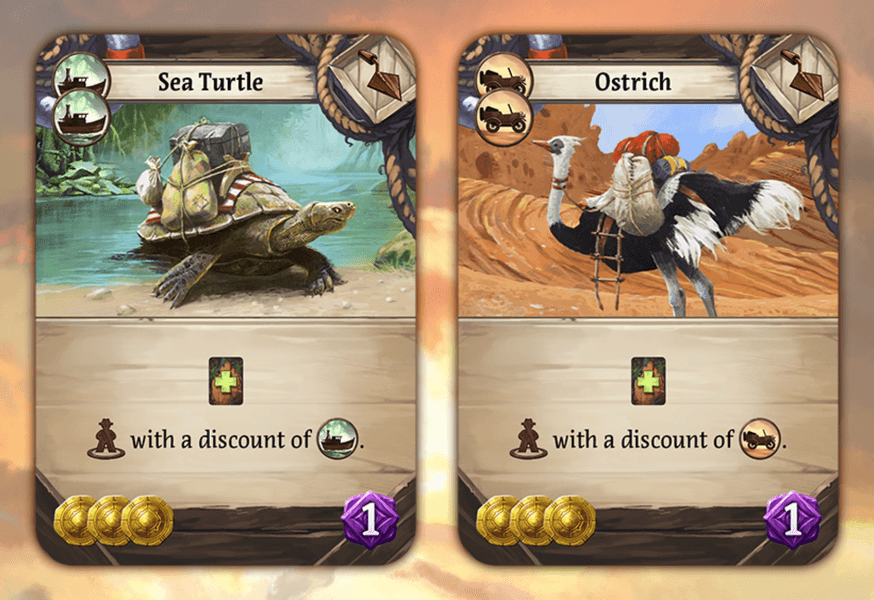 Developing the cards was a part of the game development that I, but especially Elwen, had a lot of fun with. Trying to come up with interesting effects that also made sense thematically. Admittedly, we were exhausted when we designed the turtle and the ostrich. But, since everyone loves these cards, as a result we ended up creating more animal companion cards than we initially intended.

During this time Milan Vavroň joined our team and started working on the card illustrations. He originally thought he had just enough time to illustrate the items, but ended up illustrating all the artifacts as well. When we saw his first cards, we were speechless! Milan had worked on quite a few CGE projects, but he seemed to outdo himself with this game. 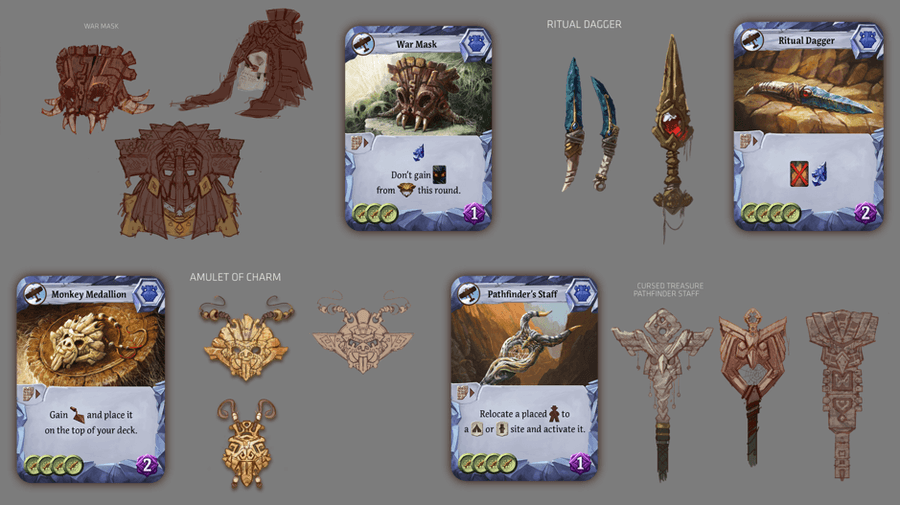 And as I write these lines, we have received the first samples from the printer. To be fair, we loved this game since the first drafts – we developed it to have fun playing with it together – but seeing it with the final design was one of the most beautiful gifts we have ever received. We’d like to thank everyone involved in the process and hope you have as much fun with our game as we do!

Here you go to the game