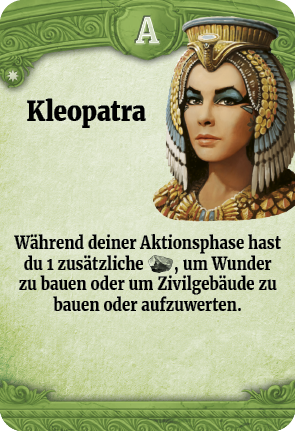 Cleopatra was the last Egyptian ruler of the Ptolemaic dynasty. She was not only educated and smart, but also a popular ruler among the people – she ensured stability and economy of her kingdom and there were no rebellions against her until the end of her reign. She spoke several languages at the age of 21 and was already leading armies. You have to admit, that’s pretty impressive. During her reign, she also managed to influence the course of the Roman Empire’s history by having affairs with two Roman emperors (yes, we’re looking at you, Caesar). It is also interesting to note that historians are not 100% aware of some parts of her life, and what she looked like is not known – almost all sources referring to Cleopatra were written long after her time. However, although Cleopatra’s life is riddled with many inaccuracies and myths, one cannot deny that she was one of the most fascinating and influential women in history.

If you look at the Cleopatra card effect, you won’t believe how many we tried before that. I’ve always thought it would be cool to give her a political effect, since her influence over the Roman emperors just screams for it. During development, she influenced the event deck, had forced pacts with male leaders, bonuses for evaluating events, etc…. Anyway, in the end I had to admit to myself that the game is too fragile in its early stages. You can’t use situational leaders here, there isn’t much room for politics, and while a political effect could possibly be developed for Age A that would be useful in most games but wouldn’t unbalance the game in the process, it would probably be too complicated for a map. So I ended up using an effect that had proven itself before (in a slightly different form, Altvater Czech from the Czech Bonus expansion had it in the first version of the game). It represents Egypt’s ability to build stunning wonders and cities more than Cleopatra herself. At this point I even thought about replacing Cleopatra with Hatshepsut, another famous Egyptian pharaoh, but we already had a very nice image of Cleopatra and would miss it, so I kept Cleopatra as an iconic symbol of ancient Egypt and its prosperity. 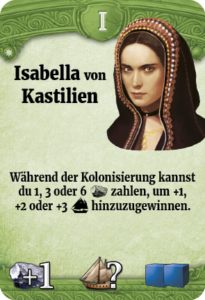 „This queen of Spain, called Isabella, had no one in this world to equal her for 500 years.” These impressive words describe none other than Isabella of Castile. But did you know she wasn’t supposed to be queen at all? Third in line to the throne, Isabella strategically bided her time and cunningly fought her way through intrigue and disputes over succession to the throne, ultimately becoming Queen of Spain in 1474. During her reign, she managed to unite a then divided Spain and introduced several reforms that minimized crime and stopped inflation. Spain began to prosper and she decided to support Christopher Columbus expedition in 1492 with this money. It was this mission that ultimately led Spain into a golden age of exploration and colonization, making it one of the greatest powers in the world.

As you can see, the effects of Isabella’s card pretty much copy her real-life achievements. The extra metal represents economic prosperity and the extra blue markers represent the decrease in crime – generally speaking, the ability to protect and multiply Spain’s prosperity. And then, of course, there is the option to invest the wealth in exploration. While she can’t hire Columbus to do that, since he’s independent in this game, there are certainly other daring captains in your nation who will take up the challenge. (I was a little hesitant to include both her and Columbus in the game, but after reading more about this impressive woman, I just had to add her as a leader of Age I. Plus, her collection of effects is interesting and fun to play with).

Eleanor is one of the most interesting and influential women of medieval Europe. She married two kings (one French and one English) and was the mother of three other kings. She was one of the leaders of the Second Crusade, she was imprisoned for supporting her son’s revolt against her husband, she ruled England as regent during the Third Crusade, and even when she later ceased to have an official role, she continued to maintain a great influence over the affairs and politics of England. An impressive string of achievements for a woman in the Middle Ages.

Their main effect is based on their political role. Playing an event represents just that – pulling strings and subtly influencing the affairs of the world. The bonus civilian action you get when you replace her represents her influence even after her official role ends. Although it might seem like the civilian action you get is just an added bonus to the balance of the game, it’s actually the primary idea behind the card. If you have a good Age A leader and keep him long into Age I, then Eleanor may be worth your choice to provide a free transition to an Age II leader. We then experimented with the other effect until we found one that was interesting and thematic. Searching the military deck is useful, and the feeling when Development Politics and Strategic Territory fill your hand and you score 10 culture on an early turn is just great! 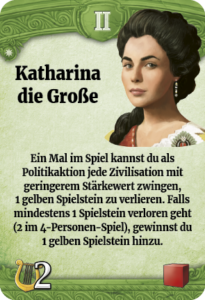 Katerina the Great was a very ambitious and passionate ruler. But did you know that her name was not Katerina and she was not Russian? She was originally a Prussian princess named Sophie and married Peter, an heir to the throne. Shortly after the marriage Sophie also decided to join the Orthodox faith and she changed her name to Katerina. When Peter came to power, however, Katerina was not impressed… and neither was Russia. She decided to throw her husband off the throne and become the new Russian ruler with vision and purpose. Under her rule, the Russian dominion grew large, the cities became prosperous due to her reforms, and her court was known throughout Europe. On the other hand, many of her subjects suffered during her reign and serfdom, which was widespread in Russia, spread to Ukraine. For these reasons, Katerina wandered into the history books as both the most popular and one of the most brutal and ruthless female rulers.

There were many different effects Katerina could have given your nation and picking just a few isn’t fair, but hey, it’s just a game. We decided on these three:

The military action represents Katerina’s political skills and ambitions. Besides all the wars she fought, she was also involved as a mediator in conflicts and wars of other nations.

Culture represents Katerina’s love for literature, art and education. The Hermitage in Saint Petersburg (the second largest art museum in the world) began with her personal art collection.

The unique ability to steal a territory represents Katerina’s policy of expansion – being a neighbor of Russia was not safe (even) in those times. During Katerina’s reign, Russia’s territory expanded by about 520,000 square kilometers.

We liked how these three effects represented the love and fear that Katerina’s subjects felt towards her and they survived, with minor changes, the playtesting. 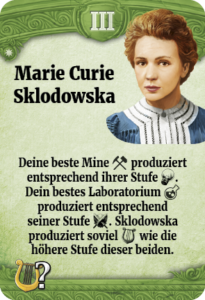 The atomic age changed the course of technological development forever and for that we have Marie Curie Sklodowska to thank. The Polish scientist was born in Warsaw and was a very talented, hard-working and smart child. She was always the best in class and when she was forbidden to study science in Poland she moved to France and received not one, but two degrees from the Sorbonne University. Believing that scientific discoveries should serve mankind, she devoted her life to extensive research on radioactivity. For her contribution to science, she received several awards and was recognized internationally. And do you still remember our buddy Nobel? Well, guess what – Sklodowska was the first woman to receive a Nobel Prize, the first person to receive two Nobel Prizes, and the first person to receive them in two different fields! Despite all these achievements, she was not spoiled by fame and remained humble until her death due to her exposure to radioactivity.

When I started working on this expansion, Marie Curie Sklodowska was one of the first leaders I knew I would add – one of the most brilliant minds of the 20th century definitely deserves it. From the start, I knew her effect would be tied to mining technologies, as it’s both good for the game (advanced mining technologies could potentially use a boost) and thematically apt (she’d hardly be researching radioactivity if humanity couldn’t mine the relevant materials). I also experimented with some moral dilemmas – in one version, you could choose between a significant military bonus if you kept her research to yourself and a cultural bonus if you shared her research with others. It didn’t work out as super as it sounds. In the end, I opted for the current effect – Marie Curie rewards late economic play and gives both a decent scientific and military bonus, as well as a certain amount of culture for those who develop their nation in all fields even in Age III.