Starship Captains (german version) was so popular with you that it was temporarily sold out at our store and also at retailers. But don’t worry, supplies have now arrived and will be back in stores before Christmas. We HeidelBÄRen are guaranteed to send out orders before Christmas. How fast it will arrive depends on the shipping company and is beyond our control.
Alternatively, you can of course visit your local retailer. You can find an overview of retailers here.

You don’t know Starship Captains yet, but you want to take command of your own spaceship? Then here is some galactic information about the game: Starship Captains is by Peter B. Hoffgaard and published by our partner Czech Games Edition. HeidelBÄR Games has now published the game in German for the first time. Starship Captains is for 1-4 people aged 12 and up and combines Eurogame and Worker Placement elements. You start with a damaged ship and six midshipmen and one cadet. The game mechanics are quickly understood. You play clockwise in turn order, and each turn you have a choice between completing a mission, activating a room, or passing. A round ends when everyone has passed.

– strength through cooperation,
peace through negotiation, knowledge through exploration

Starship Captains is for 1-4 people aged 12 and up and combines Eurogame and Worker Placement elements. You start with a damaged ship and six midshipmen and one cadet. The game mechanics are quickly understood. You play clockwise in turn order, and each turn you have a choice between completing a mission, activating a room, or passing. A round ends when everyone has passed. 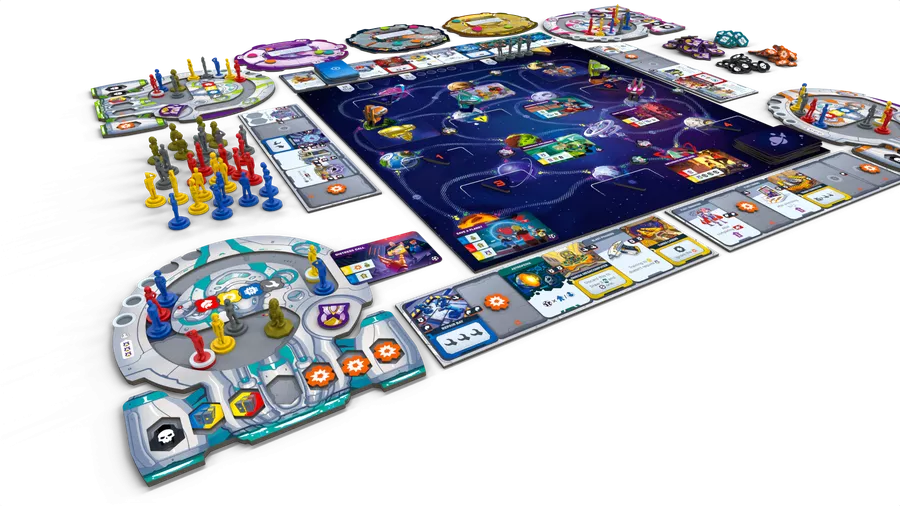 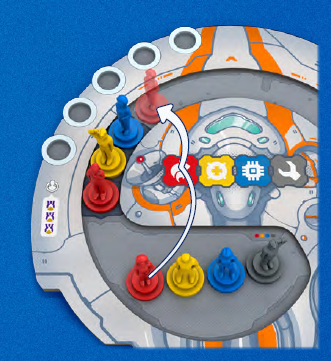 Crew members in the Ready Room are available to you. To use their ability, place them on the icon for that room and then at the end of the line in the Break Room. Used members are no longer available to you in this round. In the next round, push as many figures through the break room until three of them remain in the break area – so there is always a part of the crew resting. Now the actions in detail:

Move the ship: If you choose this action, you may move your spaceship up to two spaces on the map to planets or space stations. On some planets you will find missions that you can reserve when you reach the planet. If you fly along routes with pirates, your spaceship will receive 1 damage directly. Damage blocks your spaceship and can prevent you from picking up items or technology.

Weapons: You may attack 1 pirate who is on a route to you. In the fight, you will receive 1 damage, but you will also receive the pirate marker along with the reward.

Science: Take a technology card and upgrade your ship and your actions. Some technologies improve your actions, give you new spaces with new action possibilities, or give you victory points at the end of the game.

Repair: This action allows you to remove a damage marker from your ship. Maintenance can be performed by cadets and also by any midshipman.

Get ready to beam – complete missions

You can also use your crew to complete missions on planets. To do this, you beam the necessary number of crew members to the planet and let them complete tasks. Completed missions give you victory points and also other bonuses, such as items.

Pass – The end of a round

As soon as all the people pass, the round ends. Then, move all but three of the characters from the break area back to the Ready Room, one at a time. You also distribute the rewards from the headquarters to all the people equally and place the station markers on the respective stations as long as there is no spaceship there. Finally, pass the start player marker to the person on the left.

Infinite worlds – many ways to win

Starship Captains is not a linear game in which you’ll have to follow a strategy to achieve victory. Instead, you’ll have numerous options to collect points. Complete missions, collect valuable items, upgrade your ship and have diplomatic success. Technologies can also give you even more victory points. 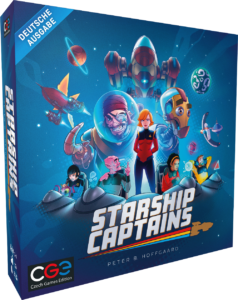 Starship Captains is by Peter B. Hoffgaard for 1-4 people aged 12 and older. The flight in space takes about 60 minutes. The game is published by Czech Games Edition and the German version by HeidelBÄR Games.