Hungry Monkey was the bestseller of HeidelBÄR Games at Spiel22 in Essen. In addition to strong interest at the demo tables, the card game was completely sold out on the third day of the fair. The game by Erik Andersson Sudén has already been released before the fair and is available in stores as well as online for RRP 14,95 €. Hungry Monkey continues the tradition of successful card games from HeidelBÄR Games, such as Tails on Fire, Blaze or Spicy.

Numerous visitors took the opportunity to get to know and play Hungry Monkey at our booth in hall 1 (1C121). On Thursday, the game designer of Hungry Monkey Erik A. Sundén was personally on site to introduce and explain his game. Many took advantage of this unique opportunity to meet the person behind the game.

At the demo tables the mood of the visitors was always very good and so it was not surprising that Hungry Monkey was already completely sold out on the third day of the fair. The card game manages to inspire young and old with its simple rules and high level of fun.

We interviewed the Swedish nuclear physicist and game developer before the fair, and you can read it here.

How is Hungry Monkey played? 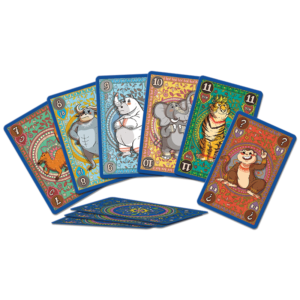 In Hungry Monkey you start with four cards face down and three cards in your hand. The goal of the game is to get rid of both the face-down and the hand cards quickly. As long as there is a draw pile, you will draw up to three hand cards after each round. Only when the pile is empty, and you have played all the hand cards, you may play the face-down cards.

Always make sure that the card(s) played show the same or a higher number than the last card played. If this is not possible, you must take the pile of played cards into your hand. Besides pure number cards, there are also number cards with effects. These can help you to exchange or get to know the hidden cards.

Hungry Monkey also gets a lot of positive feedback outside the game fair. For example, it is praised in the current FAIRPLAY magazine Hungry Monkey and the Brettspielgeeks even call it their best nightcap game of 2022 in their video. At Abenteuer Brettspiele, Hungry Monkey makes it into the preview list Top 10 small games & party games at SPIEL 2022.

Hungry Monkey is for 2-6 people ages 8 and up and takes about 15 minutes per game. The game has already been released and is available for €14.95 MSRP. The card game includes 72 animal cards with 12 different animals, 1 Evil Cat and 22 bean cards for alternative scoring in multiple games.
In addition, Hungry Monkey is ecofriendly. This means that it was produced in a factory that uses only renewable energy and is made from biodegradable or recyclable elements.