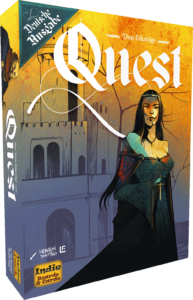 New in German, the card game QUEST will be released at the end of September 2022. In the new deduction game from the makers of DER WIDERSTAND and COUP you will discuss, argue, and lie! The team game specialists from the US publisher Indie Boards & Cards have set QUEST in the world of Arthurian legend. Four to ten players can choose from 18 differently illustrated character cards. QUEST will cost 17.95 € MSRP and can be pre-ordered now from us as well as from retailers: maps.heidelberger-spieleverlag.de

Mordred’s vast army of evil has brought Arthur’s forces to the brink of defeat. The future of Britain hangs in the balance. In QUEST, players take on secret roles that determine whether they belong to good or evil. But that, only they know! They therefore discuss, argue and lie to determine who they will send on the eponymous ‘quest’. The teams must be chosen quickly and without voting.

Send brave heroes on a series of ‘quests’ to change the balance in favor of your party. For if there is even one of Mordred’s minions, any quest may fail. However, powerful magic and amulets support Arthur’s forces, but even Mordred’s minions still have secret means and…..