At Spiel 22, the English version of Deal with the Devil could already be admired. If everything works out, the German version, which will be released by HeidelBAER Games, will be delivered before Christmas. If you want to keep the chance to get the game in time for Christmas, you should pre-order it. We can’t promise it, but we will do everything to make sure that the game will be delivered in time for the holidays. Deal with the Devil is by Matúš Kotry and published in English by our partner publisher Czech Games Edition. 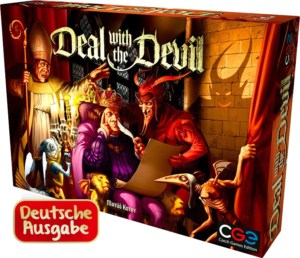 Deal with the Devil is a competitive and asymmetric connoisseur game for exactly 4 people. In the Eurogame, four kingdoms compete to give greatness to their city. Two kingdoms are ruled by mortals, one by cultists and one by the devil. Each kingdom offers the players its own strategy and scoring possibilities. The starting conditions are also different. Each person gets starting resources according to their position on the board and receives a chest. This shows the person their role and contains role-specific items. For example, mortals start with three soul pieces and tokens to suspect other people of being devils or cultists. The cultists receive two cultist soul pieces and a few resources. The devil starts without a soul, but with lots of resources and money.

Take full advantage of your role and starting conditions, adapting your strategy to the role. During the game you’ll try to expand your city spectacularly to collect as many points as possible. The central element of the game are the trading phases. Here, mortals can offer resources in exchange for money, and the devil lures mortals with valuable resources in exchange for a part of their soul. While cultivators will gladly make this deal, mortals must carefully consider whether they want to make this risky deal.

The trading phase is played with the help of the app. This way, the app knows the role of each person at all times, while the people don’t know the role of the others. So be careful when you’re trading and afterwards that you don’t let your role show. After all, you don’t want the Inquisition to check the integrity of your soul in case you sold it.

The app is an important element in Deal with the Devil. It adds a digital element to the game and is intuitive to use. The app itself does not take up too much space, but merges playfully with the game in the background. 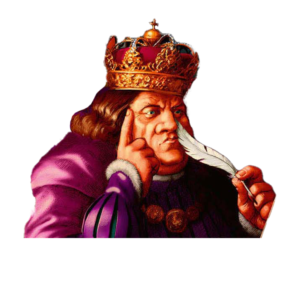 You’re the builder of the most spectacular medieval city ever… if your carefully managed loans are enough to outdo your rivals. Hah, wouldn’t it be nice to have unspeakable wealth at your disposal to erect important buildings at once and thus catapult your city to the top? The price for such extravagance? Oh, nothing more than a piece of your soul … But be careful. Others may notice that you are missing this precious piece of yourself. And punish such impudence! No reward without risk – the choice is yours.

Deal with the Devil is played over 5 rounds, and each round consists of 6 phases.

In rounds 2 and 3, there is also the Witch Hunt phase, and rounds 3 and 5 end with the Inquisition. 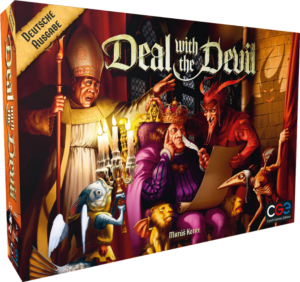 Deal with the Devil is by Matúš Kotry and for exactly 4 people from 14 years. One game lasts about 120 minutes. The connoisseur game comes with a lot of game material. Including 1 manufacturing board, 4 screens, 1 inquisition board, 4 chests, 6 soul pieces, 2 cultist souls, 12 voting rings, 80 building cards, 20 event cards and over 200 tiles. Playing requires a free app, which you can download from Google Play here and the App Store here.