It was the first time for us to attend Tokyo Game Market, and it was an experience like no other in the board game industry. If you do not know Tokyo Game Market, Wikipedia might help. It is a 2-day event in Tokyo with a strong focus on independent game designers. We learned a lot, experienced a lot, and played a lot. What else is needed? Here are some impressions, pictures and stories we wanna share, even if we know that all of this is still not living up to the event. 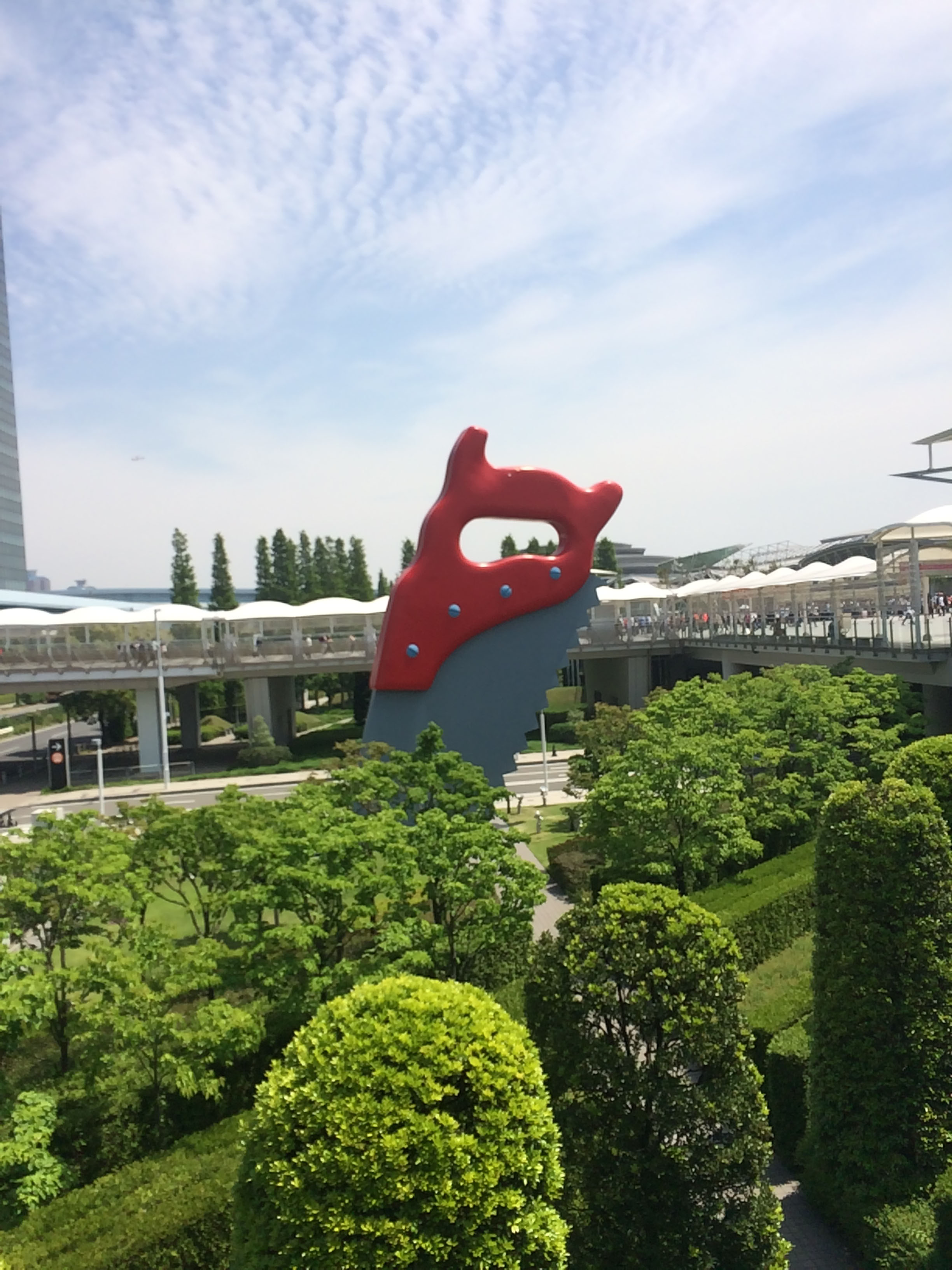 TGM is held in a convention hall in Waterfront City, in the southern part of Tokyo. My hotel was in Asakusa, which is more in the center of Tokyo. Thanks to the support of Korean friends I survived the challenges of the enormous Tokyo subway and arrived in one piece. Just to see this after leaving the station. A beautiful day is nothing without a giant saw in front of you … 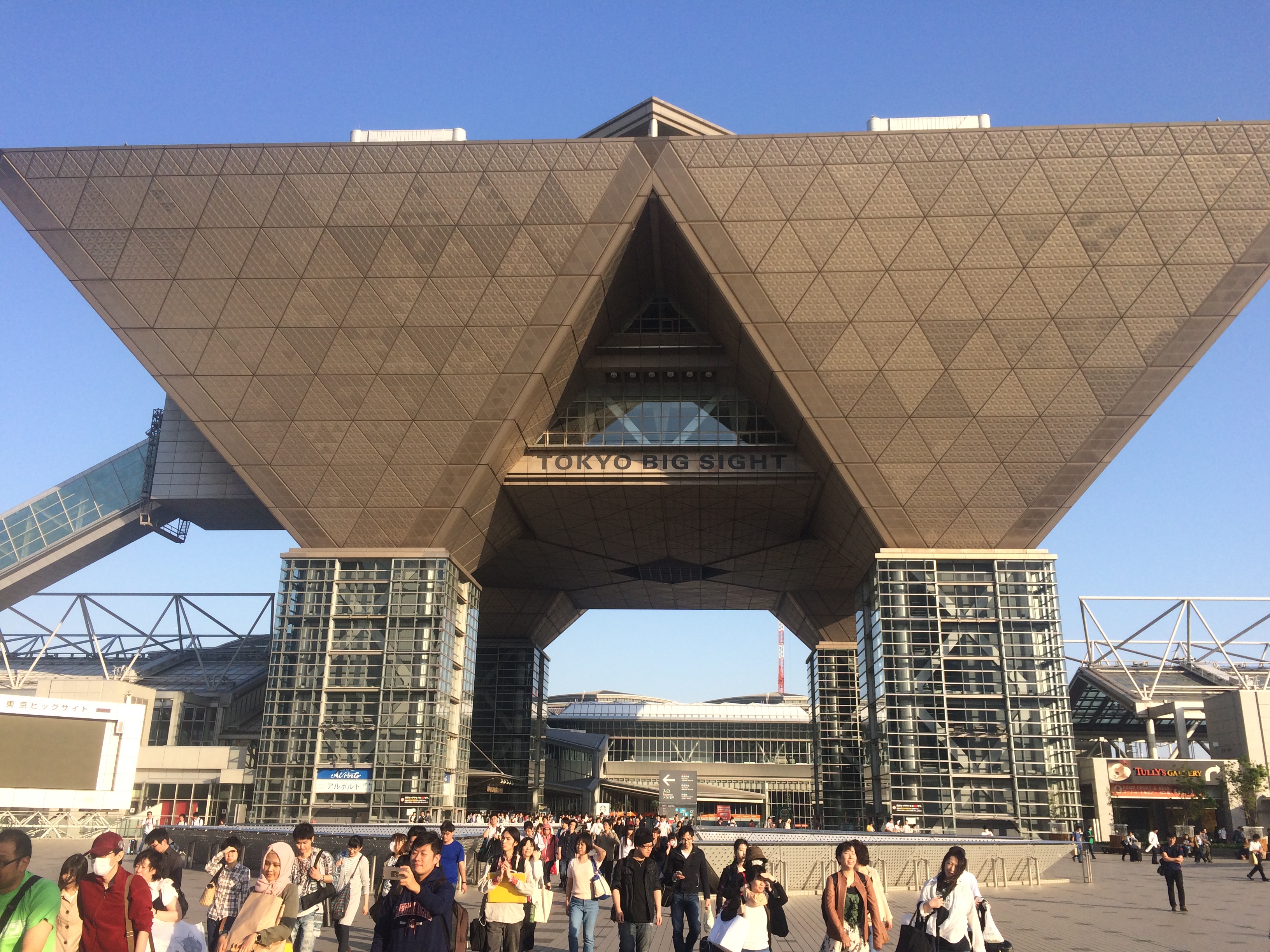 This is Tokyo Big Sight where TGM is held. The name makes sense, especially if you stand in front of it. Anyway, many buildings in this area seem to be made from scifi movies … or probably the buildings in scifi movies just copy impressions from Tokyo, which seems to make more sense to me. 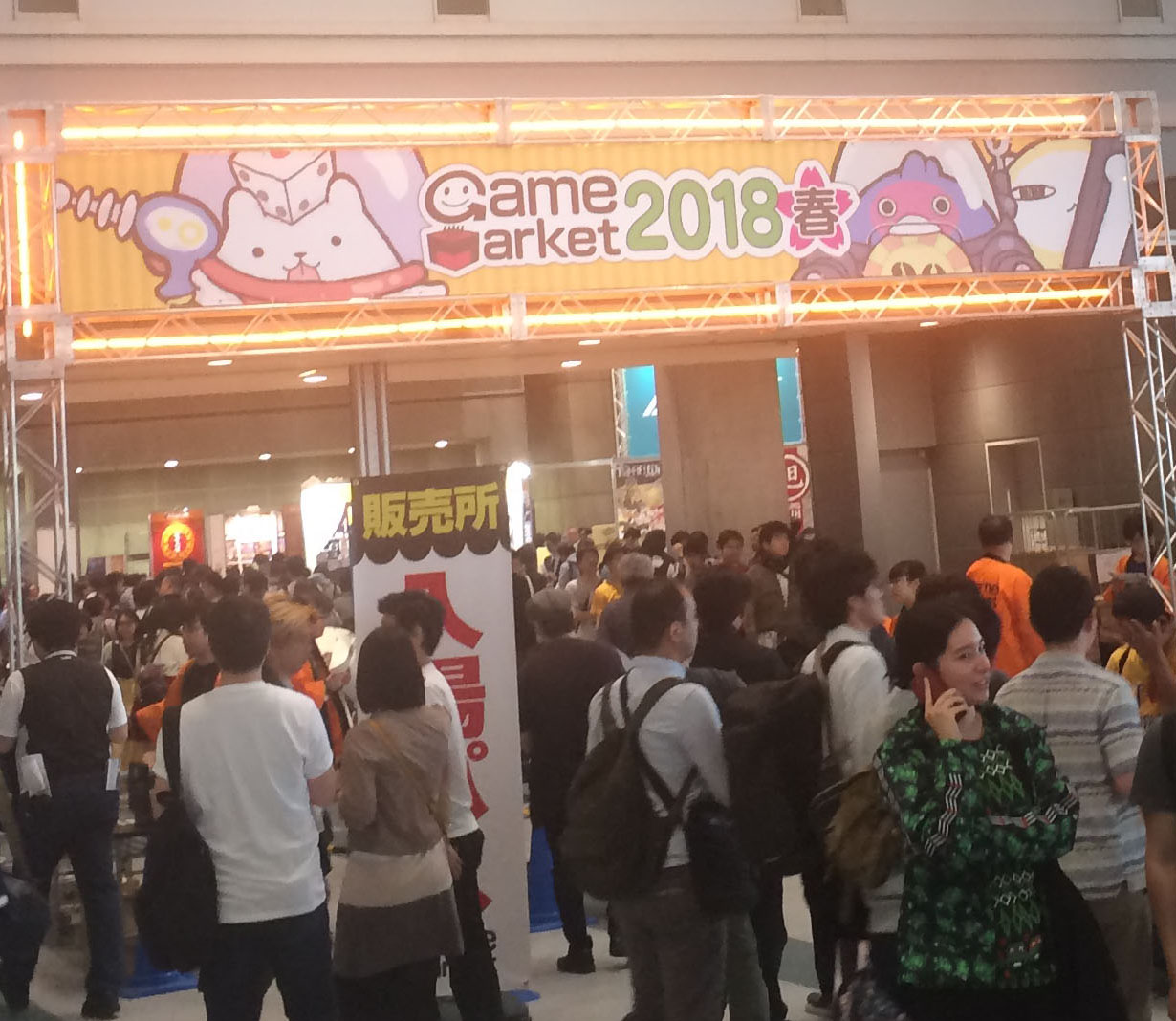 The Gate to TGM. Finally we arrived at the convention hall after wrongly walking to a comic event in another hall first. I can tell that if you did not master Japanese language, it is not always easy in Tokyo. But if you are willing to ask for help, you will get a great deal of the Japanese politeness. There was always helpful people around. 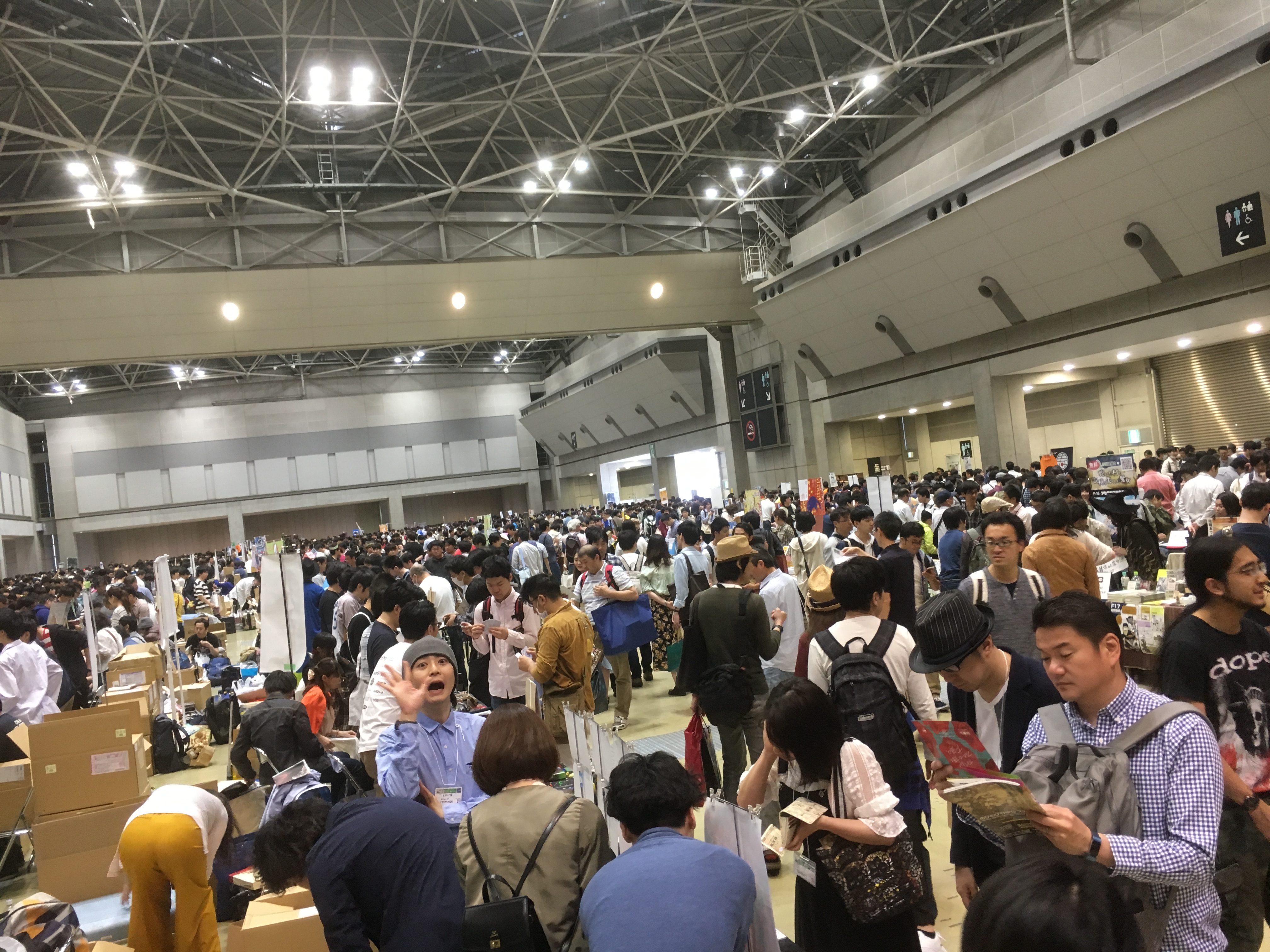 Welcome to the madness and magnitude of Tokyo Game Market. Independent game designers and gamers … a lot of them. This picture shows how hard it is to find something, because you can hardly see any booths. Most of the designers have just a part of a table, enough to display the game. Some have tables for gaming, some not. The catalogue with booth numbers is helpful, if you can handle the Kanji Alphabet, so not for me. It is a huge and touching accumulation of passion for games, and I sort of wonder if game events like Essen SPIEL were the same once ago, in their innocent times (and I am in the industry since more than 18 years). Before booths became big and professional and the business became way more serious. I was amazed seeing the Game Market like this!

Here just a few of the wonderful game designing people I found. These are desginers who had mostly more advanced designs (visually), people I had heard of, or interesting people I met. It would be impossible to display the hundreds of game designers … which seems to be unfair. I was so overwhelmed, and I am sure many more deserve attention, but I was too stunned to make as many pictures as I should have. This place is full of pearls of game design, it is just hard to find them, especially as a non-japanese-speaking person. 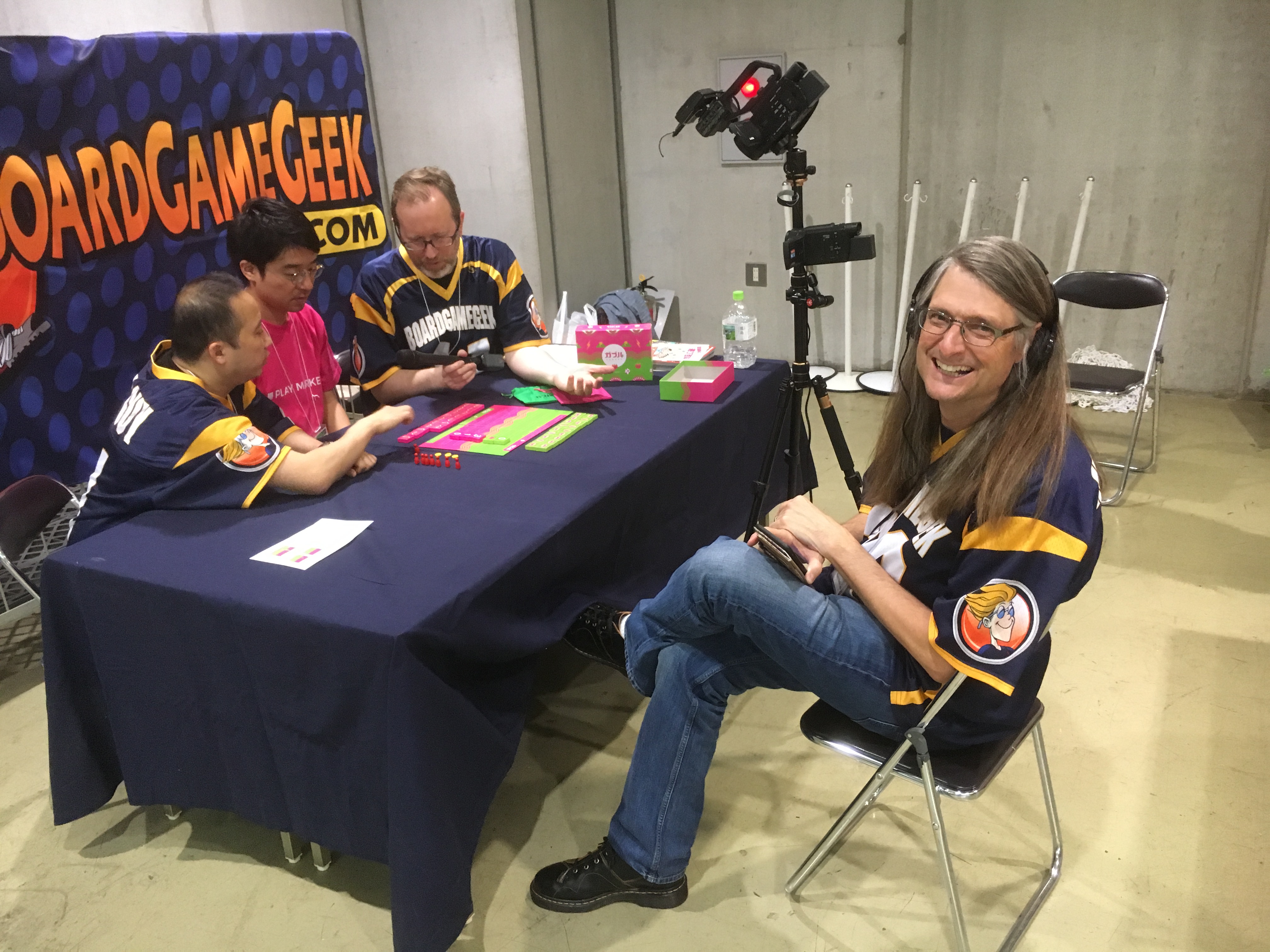 No relevant event without the game-loving folks from BGG. They made footage with game designers and probably played a lot. I was really happy to meet them, we had some nice talk about the beauty of the Game Market and how to share this with the worldwide community. I think they are a big help for designers from Japan, Korea, Taiwan etc. to reach out to the gaming world. Passion for games meets passion for game-designing. 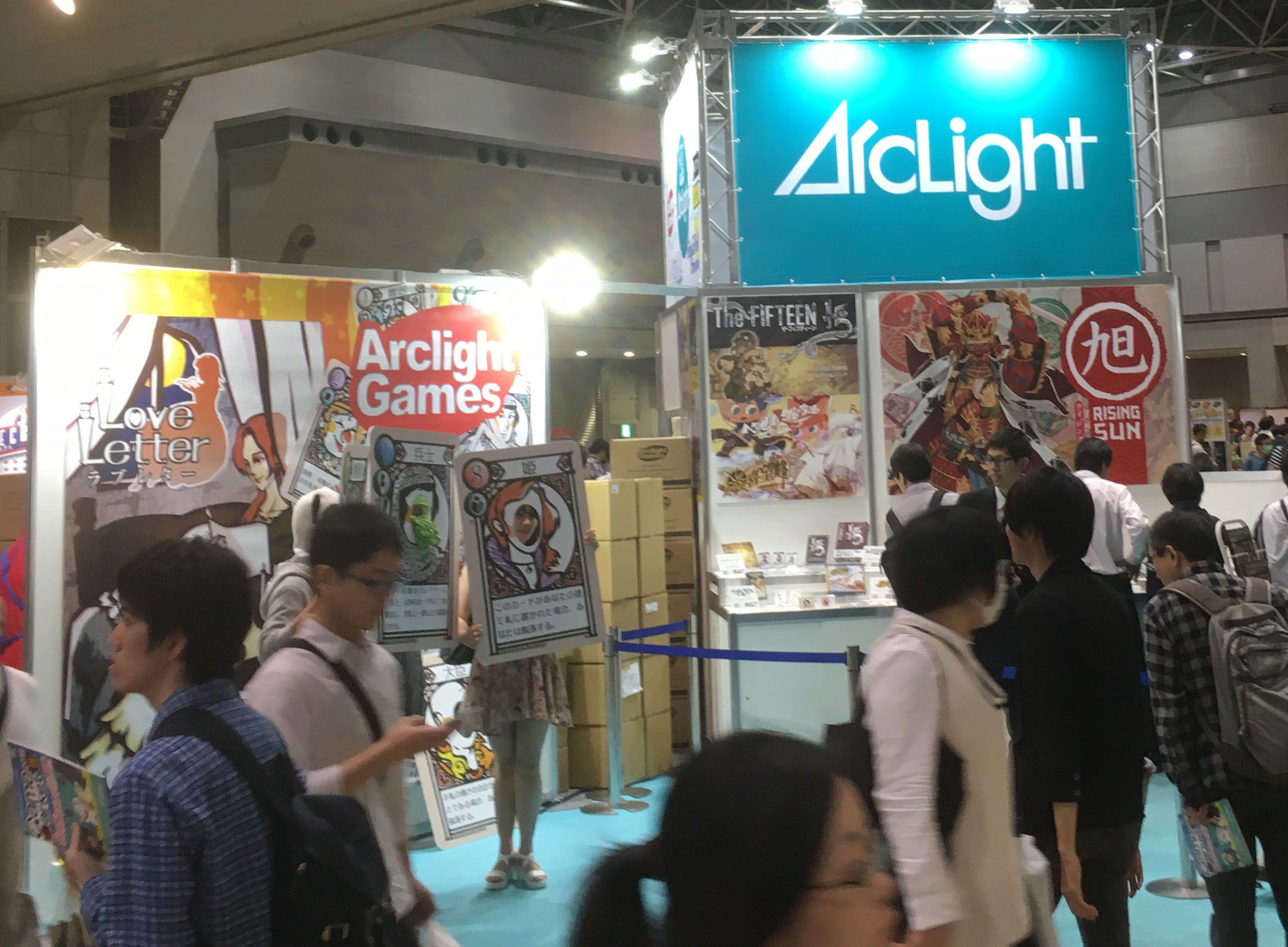 Arclight is a big distributor in Japan. They bring many international games to the Japanese market. They are organizing the event and were a big help for confused foreigners like me. Japon Brand also was extremely helpful, they are doing sort of the opposite from Arclight and help Japanese designers to visit international shows and present themselves. They started the Game Market long ago. Thanks a lot to all of the members from Arclight and Japon Brand I met! 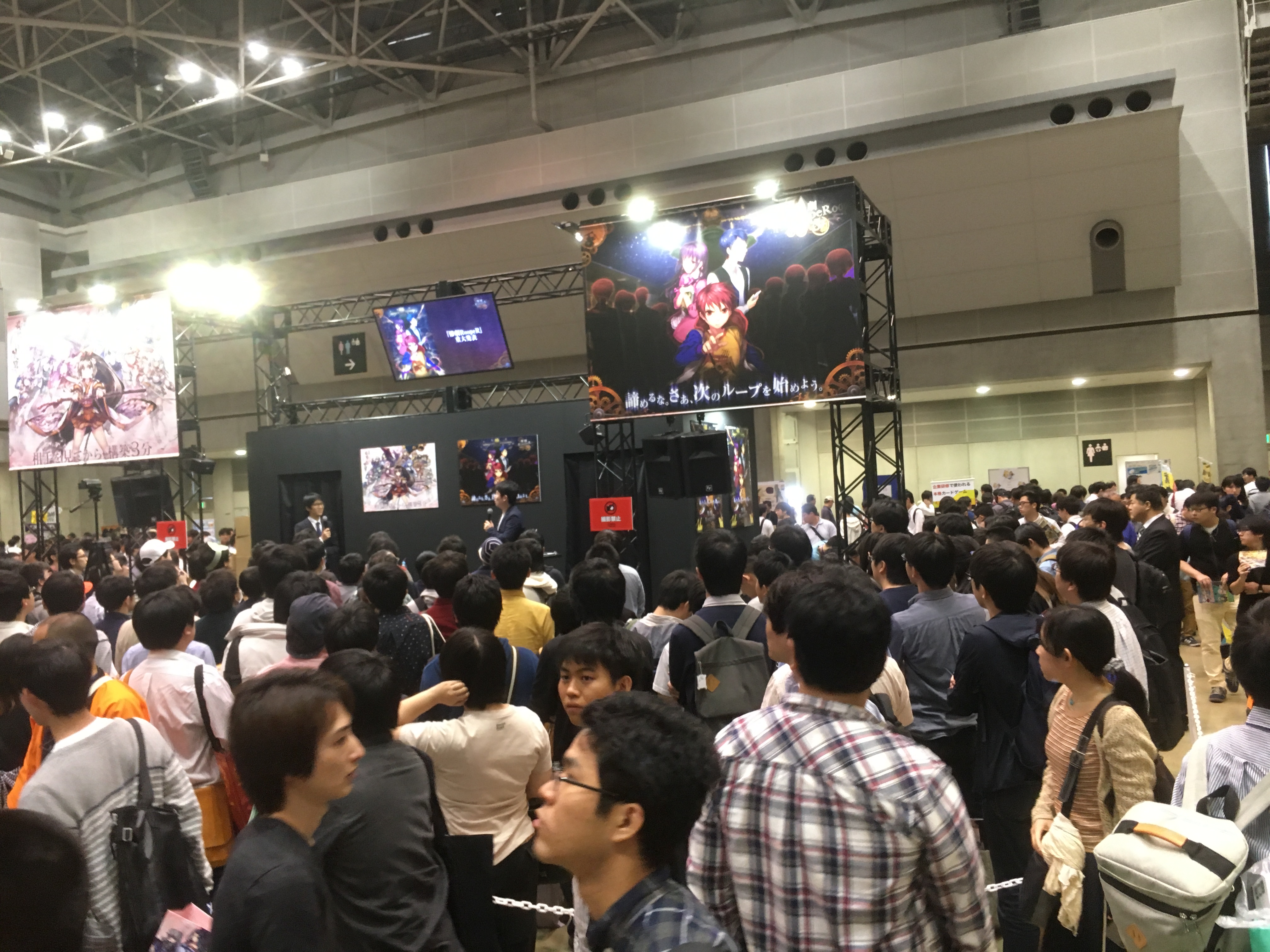 Local heroes on display. Baka Fire is the designer of an iconic game called Tragedy Looper (and other games). They made a big booth for him and organized a kind of party with discussions, interviews and more events. It was always packed. I was impressed and as I found out later, he indeed seems to be a very cool guy.

Well … no Japanese event without that I guess. I expected to see way more of heavy Manga style, but I did not. The event was way more focussed on the beauty of gaming itself instead of crazy Japanese art, which is not too bad I think, even if I like manga stuff from time to time. 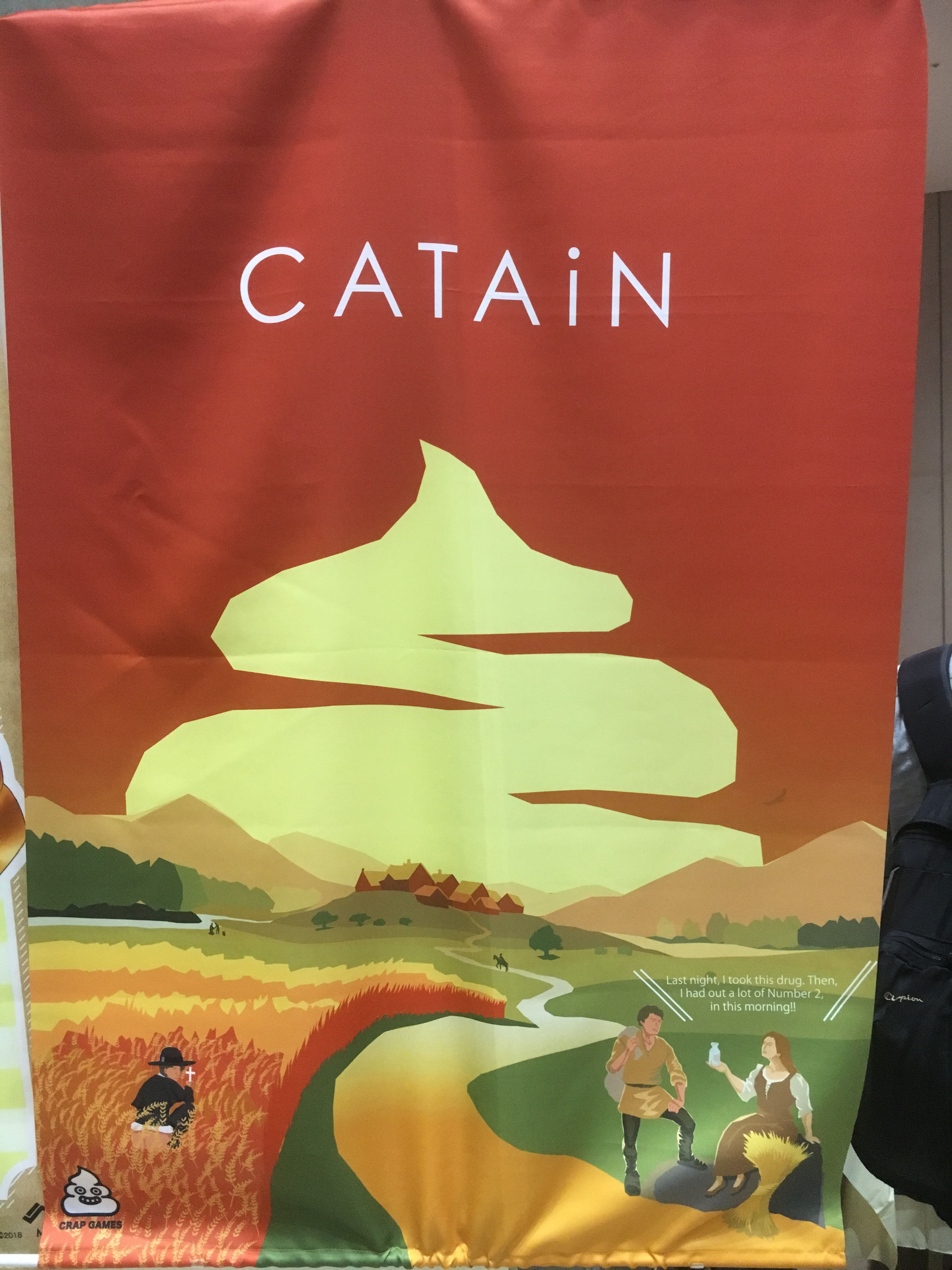 Well … this sort of caught my eye. The designer of One Night Werewolf, Akihisa Okui, was at this booth, which I found out by accident. This very specific poster shows a game about making the longest poop possible. This booth was overall full of weird ideas. Very delightful. 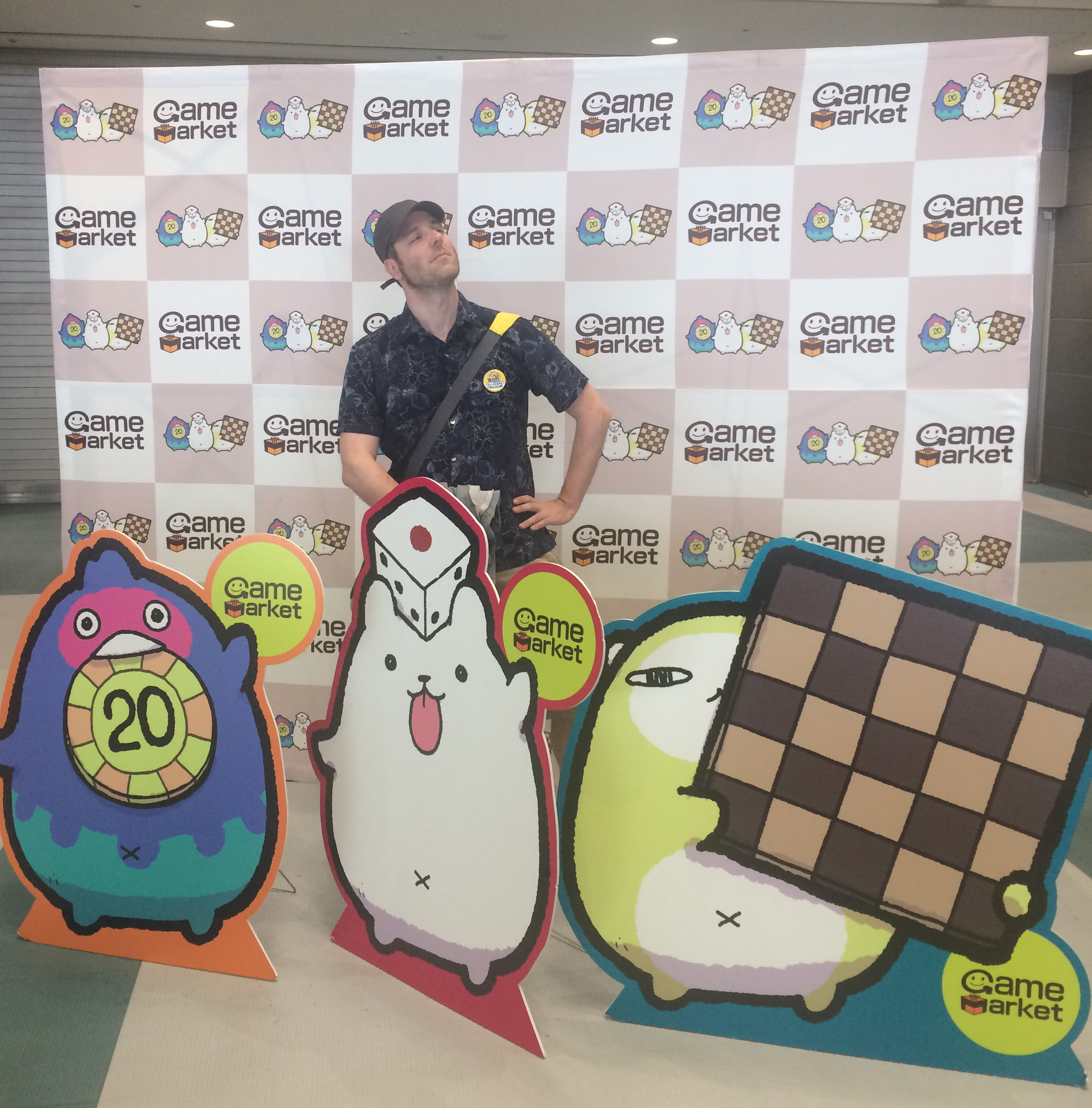 After two days, i was spent, but full of inspiration, ideas, and rich on new friends on contacts. It was worth the trip and I hope I will come back next year, probably better prepared. There is more than one Game Market per year, so you have plenty of chances to go. Time for me to use the evening in Tokyo, before flying home next day. 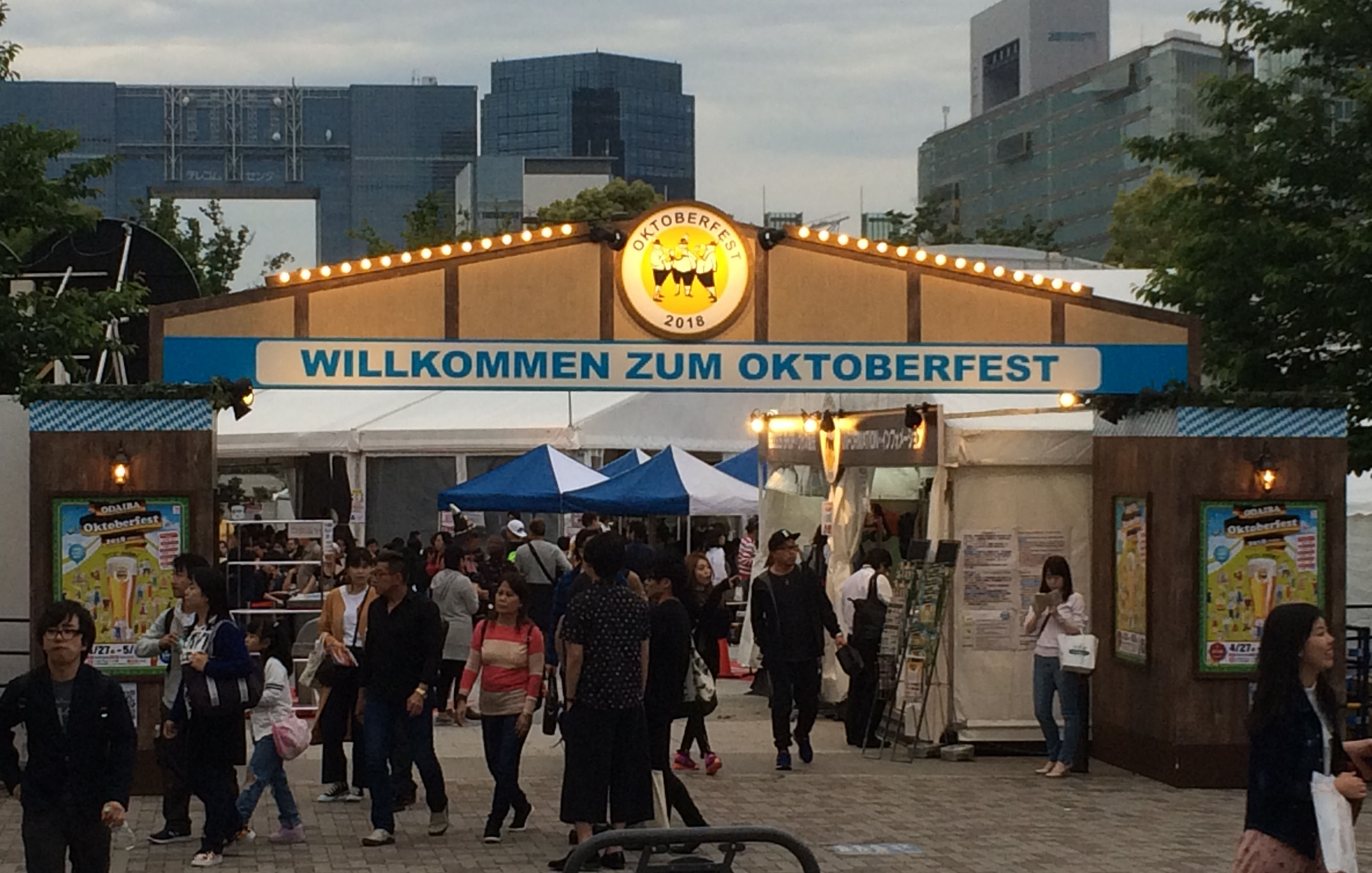 Time runs fast, so it was time to call it a day. But Tokyo offers more, so I went outside to explore a bit. But then … I stumbled into this … in Toyko. Our game design studio is from Germany. And my only question is … WHY? WHY? WHY??? 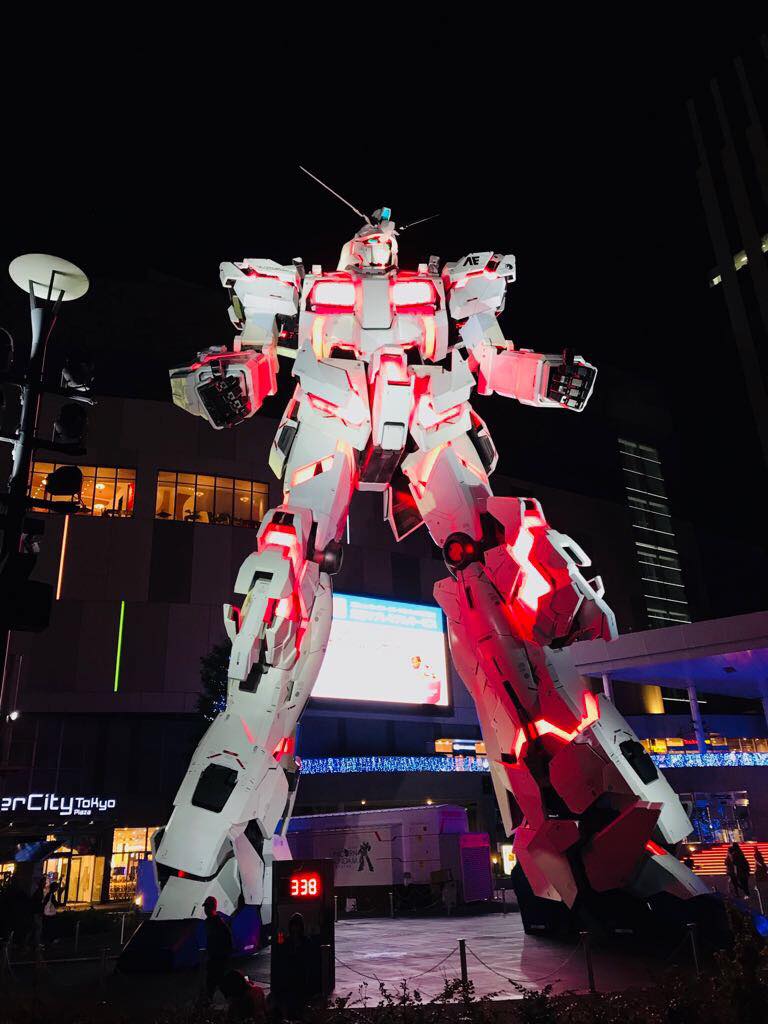 This picture was provided by a friend, because mine did not catch the massiveness of Gundam. My guess he is 20 Meters high. All my nerd genes were trembling. This was quite a sight! Another good reason to see Tokyo, if you ask me. 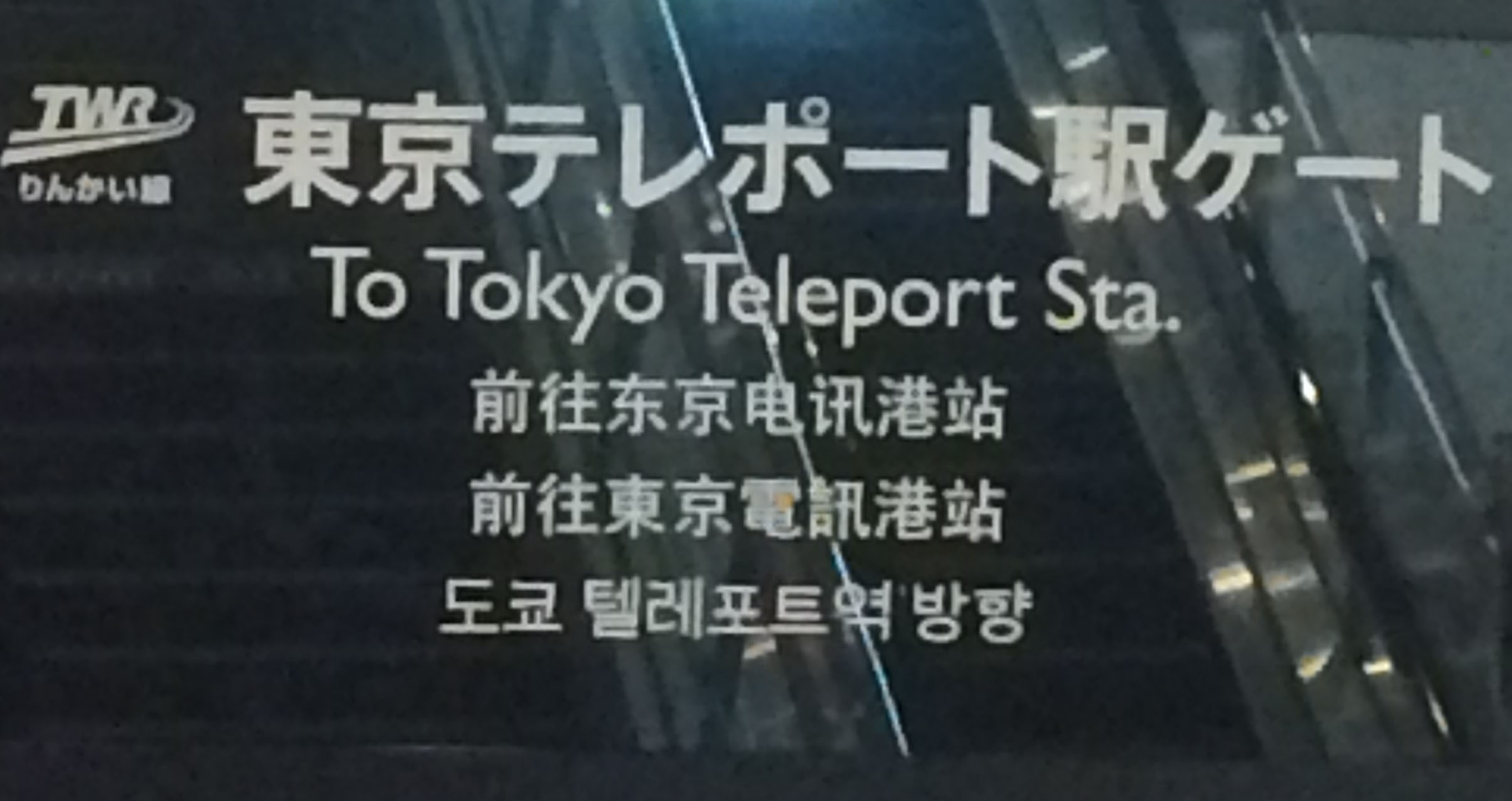 I always asked myself, when Teleportation finally will be available. I was surprised how advanced Tokyo already is about this. I learned later, they have only one teleport station, so probably no one knows where something is then teleported from there. But it is a start. 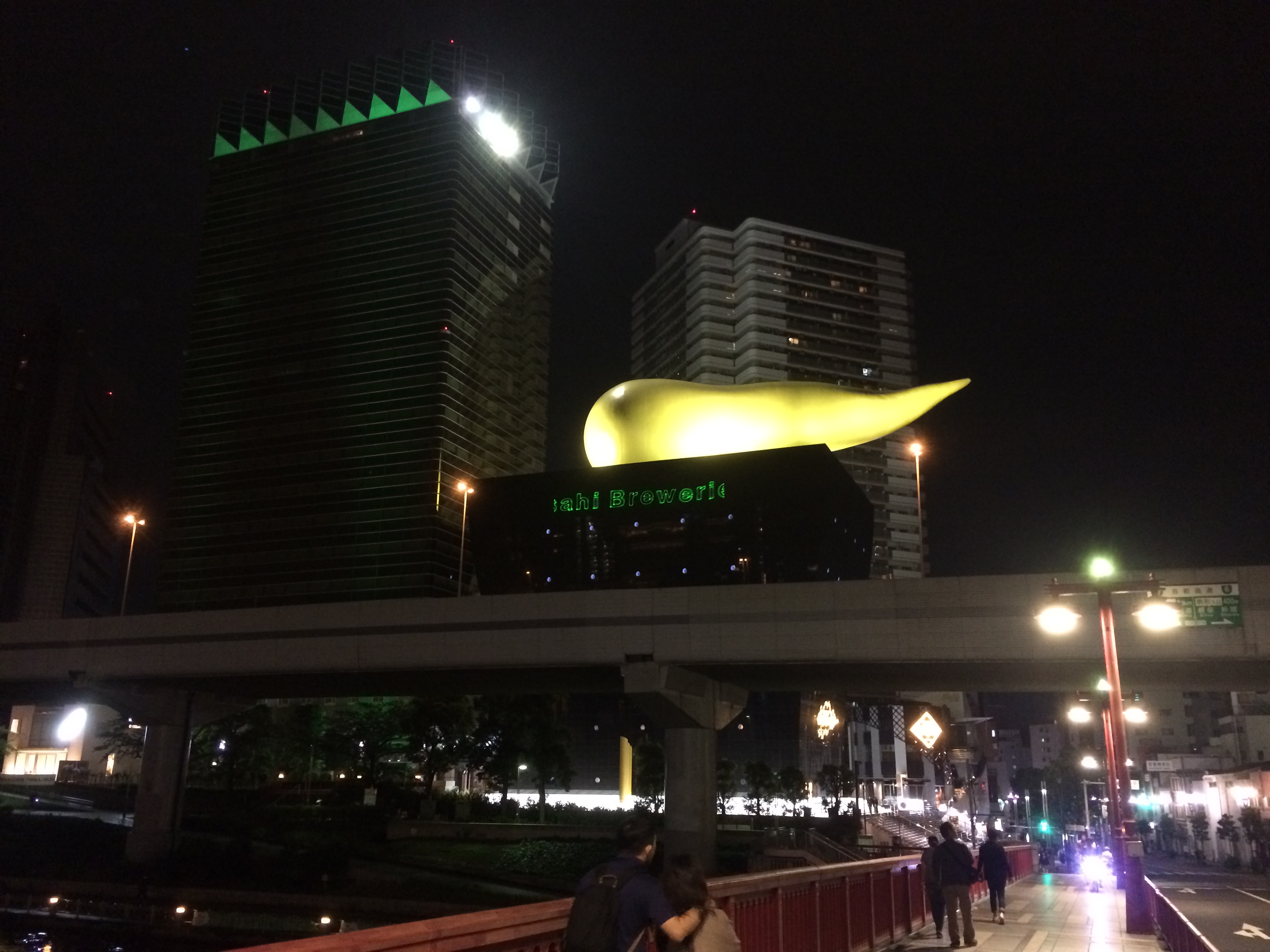 Time for some sightseeing around my hotel. To follow the pooping game from above, I found this giant golden poop around there. Just to learn later, it is the logo of a brewery. Well, you might see different things in it, but I like how different Japanese companies are in some ways. I would not really expect to see this in Europe or the US. But who knows? 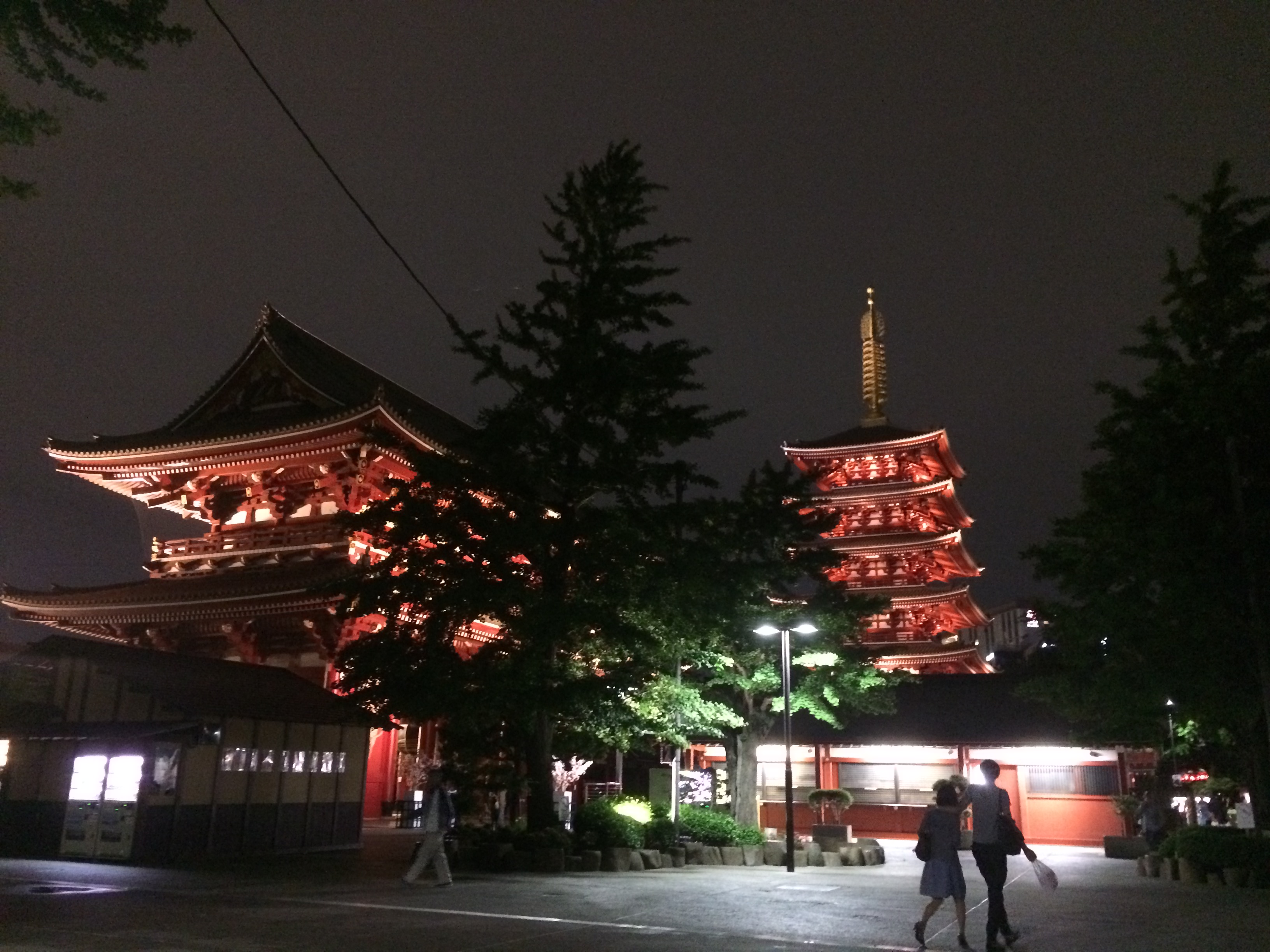 Culture never hurts, and Tokyo is reach with it. This is the famous 5-story Pagoda by night. There are so many magnificent temples at this place, I had trouble to choose a picture. Asakusa is worth visiting for sure. During daylight the place is crowded, but late at night, it is quite peaceful. I took one of the fortune sticks including the explanation. I found bad omens, but luckily in this case, you just bind them to some wood, so they do not catch up with you too hard. And so I did! 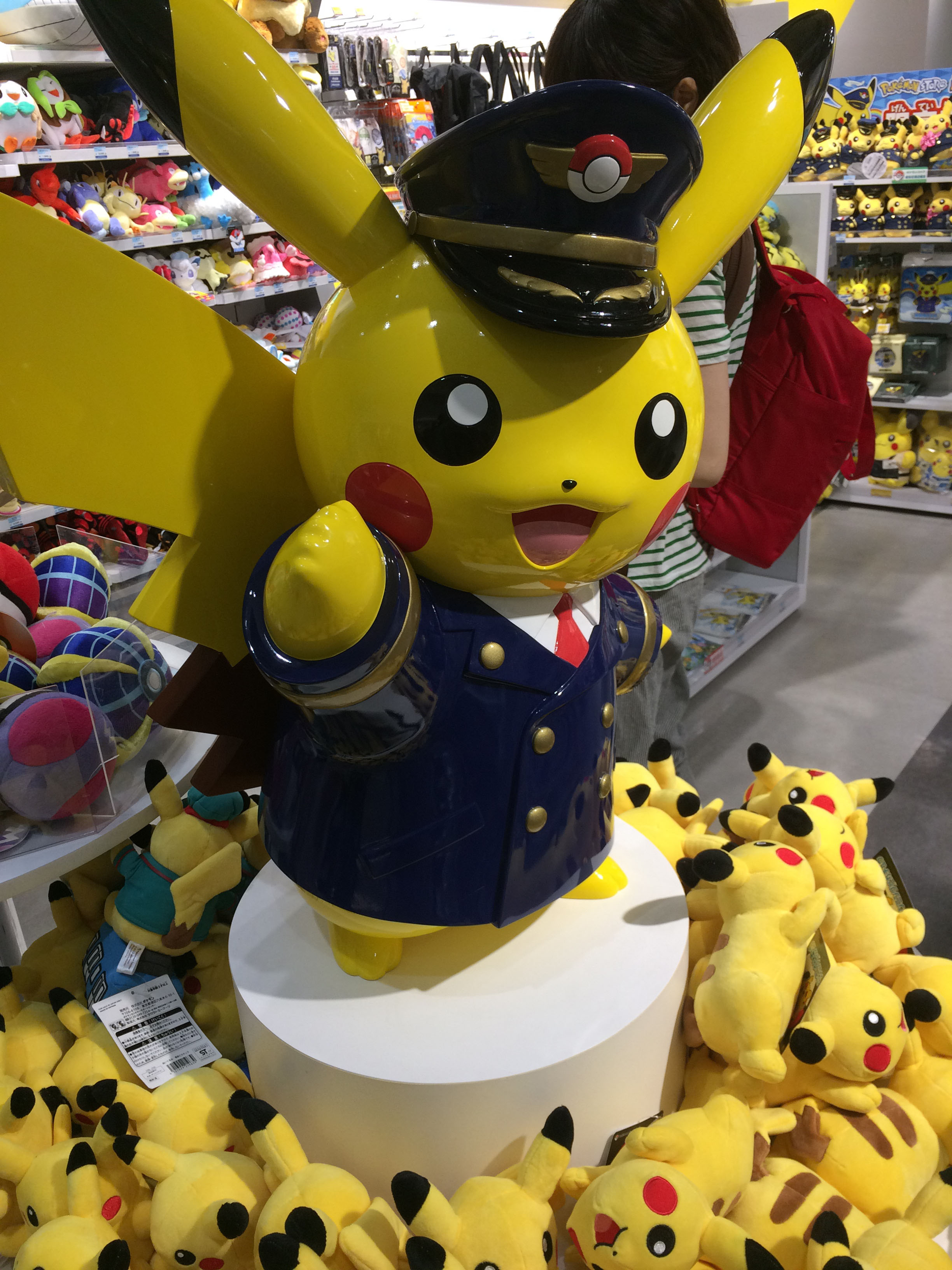 At the airport I was finally caught by more Japanese culture. I was surprised, because I expected to see way more of Pickachu, Yu-Gi-Oh, Hello Kitty, Manga, and crazy pop idols. But friends explained to me that I would need to see other places in Tokyo to have more of this. Well … a good reason to come back. This would be it for today, I hope you got a glimpse on what I experienced in Tokyo! Share if you like or like if you care 😉