The Huicholes are indigenous people who have lived in Mexico’s largest mountain complex, the Sierra Madre Occidental, for more than 500 years. The Huicholes’ myths and legends allow us a glimpse into their exceedingly rich culture. Like this story, which was the inspiration for Tails on Fire:

Deep in the mountains in the north of Jalisco was a small village. There, all beings lived in harmony. It was a cold region, but the villagers and the animals tended the fire, which gave them warmth and comfort in the cold nights.

One night, Iguana decided to leave the village secretly and take the fire with him. Iguana had always craved the fire, and now he wanted it all to himself, after all, he had looked after it often. Iguana brought the fire to his hiding place at the entrance of a cave up high near the top of the mountain. When the villagers noticed the theft, they gathered in despair. In the distance, they could see the light of the fire brightening the sky while they had to remain in darkness. More and more voices were raised demanding to bring back the fire. Crow and Toad were the loudest among them. But the people also longed for the return of the fire. They made a plan to get the fire back without being discovered by Iguana. But it wasn’t easy.

The mountain was so steep that no human could ever reach the top. There were numerous attempts, but all failed. Tlacuache, also known as Opossum, watched the villagers struggle for a while. She was considered extremely cunning and finally came up with a plan to retrieve the fire herself. 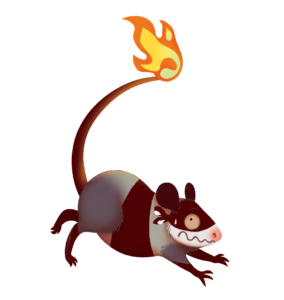 On a starry night, Opossum began her journey up the mountain. She could climb well, so the dangerous slopes didn’t bother her. When she reached Iguana’s cave, she immediately curled up into a ball and remained like this motionless for two whole days. Iguana was alarmed at first, but he had no idea what it was all about. And as time went by, his attention waned, and he paid no more attention to the strange fur ball. When he fell asleep, Opossum let go of her camouflage and sneaked up to the bonfire. Only how was she going to take the fire with her? Since Iguana could open his eyes at any moment, she put her tail into the fire without further ado. When the flame on the tail burned bright, Opossum ran down the mountain in panic and took the precious fire with her.

Iguana woke up furious and began to throw stones and dirt at her, but Opossum was already out of reach. Enraged, Iguana took chase, running fast as the wind. He had almost caught up with Opossum when Opossum suddenly and unexpectedly fell lifeless to the ground. Iguana who intended to attack her found no sign of life left in her. So he simply stepped out the fire on Opossum’s tail and roared: “Stupid opossum, the fire is mine and mine alone! I am the king of the sky, and only I shall possess the fire, while all of you look up to me enviously… hahahaha!” Then he went back to his cave, a bit confused, but satisfied. It is said that Opossum had lost the fur on her tail forever that day. 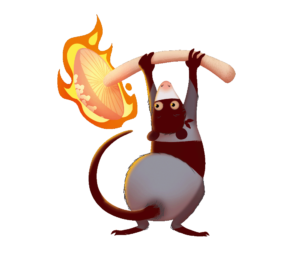 Down in the village, all the animals and villagers had witnessed the terrible pursuit on the mountain. They wept and mourned the death of brave Opossum. But all of a sudden, Opossum stood up again. With the little strength she had left, she climbed back down to the village and presented a remnant of ember that she had stolen from Iguana’s bonfire and hidden in her pouch. From that day on, the Huicholes and the animals of Sierra Madre Occidental finally had their fire back. There was no end to the celebrations, they ate cooked food and were able to sleep warmer during the cold nights.

That is why the cunning and brave opossum is revered by the Huicholes as a symbol of wisdom up to this day.

This is a free interpretation of the story that the Huicholes tell in many different ways. Such stories come from the tales of the Huichol ancestors and their representations by the artisans of these indigenous people. The Huicholes’ gratitude for opossums lasts until today and if you travel to the Sierra de Jalisco in Mexico, you can see with your own eyes how much the indigenous people love the opossum.

The Huicholes have maintained their customs and traditions over time. Since their beginning, in times of Spanish colonization, they have not been affected by the development of other people, or by emerging technology. They have been able to maintain their customs, beliefs, and religion thanks to the art that has always accompanied them and in which they have recorded many events from their beginnings until today.

The Huicholes started out making handicrafts as offerings to the gods. Today Huichol art is known worldwide for its yarn paintings and accessories made of beads and micro chaquira.

Tails on Fire is an interactive card game in which the ever-changing selection of the best three playing cards for a round leads to a permanent dilemma, creating a unique gaming experience. This challenging game with easy-to-learn rules is the...
Read More
Scroll Up