Coyote is a charming bluffing game whose basic principle has been known for a long time. Our HeidelBAER game developer Roland describes the considerations and changes behind the card game.

About the author Spartaco Albertarelli

We have already worked successfully with author and publisher Spartaco Albertarelli several times in the years of the old bear. He is known for easy, clear game concepts with a strong encouraging character. 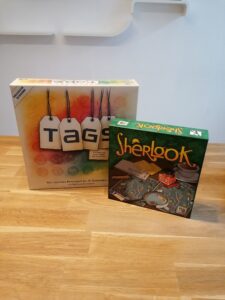 His Category became our Tags; a refreshing, lightning fast variant of the German traditional game “Stadt-Land-Fluss”, with marbles in the box. Sherlook from his publisher Kaleidos Games got a German edition.

At the Spiel in Essen, Heiko met regularly with Spartaco. There the idea grew to make a new edition of Coyote. Simply sticking a new logo on the former edition didn’t seem promising to us, since even Ravensburger wasn’t successful with such an approach a in the long run. Our claim and mission was to freshen up Coyote’s gameplay and to score with a new, more adult design without changing anything at the core.

Already in my early days as a game designer, Coyote caught my eye. Around the turn of the millennium, when I started developing games with diamons shaped tiles together with my brother-in-law Tobias, I read a lot of old boardgame magazines – Spielbox, Fairplay, Pöppelrevue – and buried myself every year in the wonderful analog cult catalog from “Adam spielt”, the biggest games mail-order company of the pre-internet era.
Headbands and feathers jumped out at me. Today when I was looking for an old Coyote at home, I discovered 3 different boxes in various corners and shelves (Coyote Erstauflage von Kidult 2003, Pow Wow von Ravensburger). The concept must have impressed me a lot. But maybe it was just due to nice evenings at block seminars in Kleinwalsertal, where we played “Who am I?” with Post Its for hours.

Gameplay-wise, my memories of Coyote are mixed. Sometimes wonderful laughs, nice evil looks and nice fat bluffs. Sometimes chanceless elimination or victories without a fine own turn or discussions about the order of effects and double negations.

The earlier editions of Coyote had mostly simple, clichéd, comic-book depictions of Native Americans.
In the German Wikipedia there is still an entry “Indianer“, in the English one it is called “indigenous population of America“. Both are rightfully critical of the designation and portrayal of this population group. 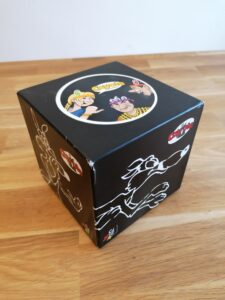 In the 3rd multilingual edition 2011 by Gigamic such representations have disappeared from the box, just the animal “Coyote” has remained.
My Gigamic edition from 2010 still had a different look:

There is also a traditional American poker variant – “blind man’s bluff” – formerly known by the following names: “Indian poker”, “squaw poker”, “Oklahoma forehead” or “Indian head”. This is relevant for Coyote, as it is also played with hidden cards on the forehead.

Feathers on the head, on the other hand, are not problematic. They are used in many cultures as jewelry or signs:

It was a matter of the heart for us to refrain from discriminatory depictions, but at the same time to keep a reference to the indigenous setting of Coyote.

We hope by working with artist Zona Evon Shroyer, who is a Yupik Alaskan Native herself, we have succeeded.
Our graphic designer Marina Fahrenbach might go into more detail.

For those who don’t know Coyote, here’s the essence: each player gets a feather on their forehead with a number on it. Everybody knows all feathers except his own. Now the players take turns betting on the sum over all feathers until a bid is challenged. Whoever is wrong loses a life.

In the basic game of the old Coyote, a very successful strategy was to be the first player to make an extreme announcement, especially if the next player has a small or even a negative number on their feather. If the second player does not doubt, the third player kills him. In the extreme, a player was out of the game before everyone had taken a single turn. Rounds where the bids went around the whole table several times were rare but more exciting.

How could we mitigate this strategy and encourage longer lasting rounds? In addition, since only 2 players are involved in a challenge (announcement and accusation), when the number of players was high, the level of attention over all players was low. We wanted to involve more players in the gameplay.

In the meantime, Matthias Wagner had joined us as an editor. We tested, played, varied many times. At our weekly game night, some well-known older and newer deduction games came on the table.

Both are neatly aging. They have a strong encouraging character due to the material, but the actual deduction is a bit awkward and often frustrating. Sometimes easy, sometimes random, sometimes impossible.
We have tried to implement similar questions in Coyote: Do I have an even number? How many positive cards do you see? Is mine the smallest number? etc. Coyote became slower and more brainy, but not good.

We didn’t get anywhere with a cooperative approach like in The Shipwreck Arcana or guessing in teams with different information like in Decrypto.

The mechanical core: the feathers

Coyote 2003 by Kidult had 3 negative feathers and 23 with positive numbers from 0 to 25 in different frequencies and 4 effect cards with fixed order of execution:

Calculating the sum is sometimes difficult, especially when there are several effects and negative numbers on display.

The calculation in Pow Wow is easier and less error-prone. The order of the effects feels more natural. However, we didn’t like the infrequent appearance of the effects, as it is them that increase emotions. Additionally, feathers could be memorized victoriously in both versions, as they are only reshuffled after 3 to 4 rounds. 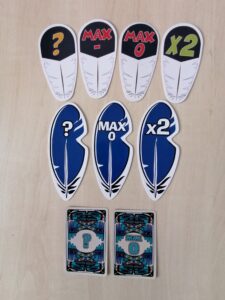 We reduced the amount of number feathers to have a similar ratio of numbers to effects as in the Kidult version.
Because of the low amount, the feathers now have to be shuffled after each round, which eliminates the advantage for memorizers of the important feathers (negative or special effect).
We did not integrate the x2 feather, mostly because it greatly increases the variance and secondly because now it is guaranteed that at least one positive number is in play. Thus there are no discussions about the Max-0 effect.

In older Coyote versions, there are several tokens providing special effects, one of which you get randomly and can use once.

Spartaco gave us even more ideas:

We tested them all several times, had a lot of fun, but wanted to focus.

We found the effect extra feather most exciting because it increased the total sum by an average of 5 and thus, when used, led to an extension of the bidding round with an increasing tension. However, the extra feather, if negative, was usually fatal for the person who got it on the forehead. That’s why it was pinned to the next player in turn order. In difference we now have it always in play, but it’s hidden in the middle for all. If you want to look at it, you have to raise. Thus the hidden information at the start has doubled (own feather and feather in the middle). It has an expected value of 10 instead of about 5 before. 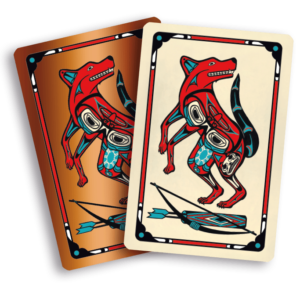 What we were still missing was a positive mechanism for the loser of a challenge.
We wanted him to feel stronger in the next round. With the trickster card, he gets the opportunity to play another face-down card that only he knows. The expected value of the total increases by 5 and he can raise relatively safely. The round gets longer.

Furthermore we liked all players to be emotionally involved in the decision of each round. Not just 2 of them. We tested several betting tracks on which all players marked the result they expected. Rewards and penalties for overbidding and underbidding took place. Or you could escape having to bid higher by paying. Once again, it was all nicely cerebral and led to obvious confusion. Off to the trash. Finally, we added a simple finger-pointing bet on the winner. If you guess correctly, you get a little bonus that increases your chances in the next round.

Player elimination is often a killer argument when a game idea is presented: Nogo! Coyote is a classic last-woman-standing game. So we had(!) to change it. For months we played with various scoring systems: Points for bets, points for accurate announcements, points for as close as possible to the correct sum, fixed number of rounds, fixed end-of-game victory point amount, etc.
We tested it with all of these once with Spartaco on Tabletopia. He found it really terrible. Everything was totally logical, but the fun was gone. So back to zero, or more precisely: all minus one: dead. And cowboy boots at the table are mandatory now.

At photos, the headbands usually look great. At the table, they sometimes scratch or stink and they squeeze hairstyles. Seriously, they are a very expensive component and they force a bigger box than Spicy’s.

For a few years now there is a Japanese version only with cards from New Games Order.

Everyone just holds up their card in front of them, as it is done in blind man’s bluff and as it is often done in a first wizard round. This is certainly the cheapest alternative, but with loose holding people often cheats appear, with or without intention, which immediately ruin a round. Code 777 had already shown how to play with very fancy standees and 3 face-down cards.

Since only one card is set up at a time in Coyote, simple little standees offered themselves. Ludofact sent a bag of samples.

We decided to use the Letter Jam design – elegant and simple:

Tests with 6 standees in Spicy’s box inlay worked out.
Only the slot width had to be slightly larger compared to Letter Jam because our radiant cards are thicker.

Our Coyote is now in stores since 2020. The traditional graphic style and compact copper shiny box are very well received. The cards have a wonderful radiant finish. Time will tell to what extent the gameplay changes and additions with a hidden, spottable card and the loser trickster will hold on.