Go from dishwasher to millionaire!

A beloved classic from our party line: 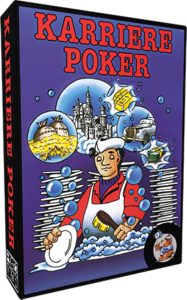 Karriere Poker
It’s the dream of every trainee to eventually climb the ladder into the executive suite. At Crazy & Co., the boss’ chair wobbles often, and before you know it, your former assistant becomes your new supervisor. And just like that, it’s time to switch seats again! But be careful! The player with the most cards left gets stuck doing the dirty work and is back to washing dishes.

This trick taking game is easy to learn and fun for anyone! For each turn, players simply play a card that is higher than the one played before them or pass. Every time a player gets rid of their last card, they take an available standee ranging from boss to dishwasher. Before beginning the next round, players switch seats based on the position they’ve taken (except for the boss!) and exchange some of their cards.  The lowest on the ladder, the dishwasher, gets the worst deal. He has to give up his best cards to the new boss. But remember, as the saying goes: he who laughs last laughs longest!