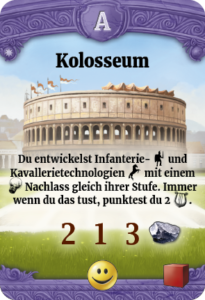 The citizens of Rome gathered in large groups at the huge amphitheater, the Colosseum, during every major celebration, preparing for a day of spectacle and festivities. At the beginning of the day, animals from all over the empire were brought to the arena and men trained for the occasion fought them in an unparalleled display of Roman power. At noon, prisoners were executed in a pompous manner, reconstructing the myth of Prometheus by chaining a man to a rock and having an eagle peck his liver. After this bloody morning, the visitors had lunch and discussed the gruesome performances while the entire floor of the arena was filled with water from a nearby aqueduct and warships were prepared for the main attraction – a complete naval battle in the middle of Rome. The dark pastime in the Colosseum would be considered vile and barbaric today, but for the children of Mars it was the greatest celebration of the year. The carnage that took place in the arena was the center of Roman folklore and it was easy to bet on who would die that day, who would live, how many innocents would be slaughtered or how many species would be brought closer to extinction. What fun!

The idea of the Colosseum comes from a similar fan-made map on www.boardgamingonline.com . We liked the idea – a miracle military action in Age A didn’t exist yet and thematically it fits perfectly. The smiley is obvious – bread and games. But the Colosseum was more than that, it was the demonstration of power and glory of the Roman Empire. Hence the military action to highlight the nation’s influence in the classical world. However, playtesting revealed that this was not enough, so we added some military and athletic tradition in the form of discounts for unit technologies. Originally, this was just a small bonus for all units, but then we strengthened the bonus and limited it to infantry and cavalry. This was for good reasons from a balance point of view – later infantry and cavalry are rather weak technologies, while artillery and air units don’t need strengthening. As you can imagine, the athleticism of infantry and cavalry can be influenced more by martial arts, games and competitions than, for example, the firepower of your artillery. 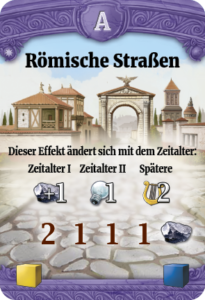 We often forget how exhausting travel was before the existence of highways, planes or train lines. In ancient Rome, logistics was the name of the game, because your army is only effective if you can get it to the battlefield at the right time. Want to transport your goods from a distant island to your capital? Good news, we have the new highly polished Via Romana you can use and you’ll be there in time for dinner! Quietly, ancient roads have served the inhabitants of Europe for millennia. Endless stories accompany the wanderer, from Hannibal marching his immense armies all over Spain, to Hercules heading in the opposite direction to steal cattle from the end of the world. The shadows of lost battles and thousands of crucified slaves follow the pilgrim throughout Rome. Roman engineers built many different types of paved stone roads throughout the Empire, from Londinium to Thebae. Even today, thousands of years later, the infrastructure built by one of the greatest of all empires that ever existed continues to be used and built upon. Why build a new road when someone has already done all the engineering work for you?

Having a good network of roads is very practical. And that was the idea behind this map – to make everything a bit more practical for you. The extra yellow and blue markers definitely make the game a little easier for you (and represent how roads allow you to own a larger territory and distribute your goods better). The variable bonus represents how trade is based on what you need most: resources to expand your infrastructure in Age I, science to develop your civilization faster in Age II, and finally culture, which you usually focus on in Age III. This card was originally developed for the Czech Bonus Pack (you can read more about the Bonus Packs on the blog) and was called “Network of Trade Routes”. In ancient times there wasn’t that much interesting stuff in the territory of the Czech Republic, but its location in the heart of Europe predestined it to become a major crossroads of trade routes connecting east and west and especially north and south – the important amber route was named after the commodity that was transported from the Baltic Sea to the Mediterranean states long before Christ. Playing with this map was, as I said, practical and that’s why we included it in the official expansion and just expanded the thematic aspect to include the Roman roads that crossed a large part of Europe in ancient times. The map didn’t change much during development, it just lost a bit of symmetry – originally you had 1 culture in Age III. That was necessary for balance and I personally like that change – I’m a player very focused on economics and losing a cool science for a stupid culture felt like a loss for the most part, even at the beginning of Age III. Two culture? Yeah, that’s better. 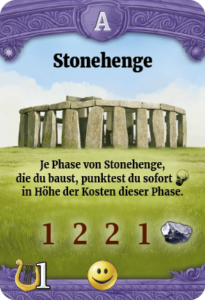 In rural southern England, where enchanted forests merge into lush pastures, stands an enigmatic structure built of giant stone monoliths. Now a tourist attraction and one of the most famous places on the planet, the Stonehenge circle has been there for quite a while. The stone slabs are arranged in concentric circles in the middle of which there is another, not complete stone circle with a possibly ceremonial altar. Historians are actually quite certain that this site was used in the past by indigenous Celtic cultures for ritual purposes… as well as by later cultures. Even today, pagan communities hold annual gatherings here to celebrate equinoxes and the summer solstice. The funny thing about the stone blocks is that they are so MASSIVE. Even today it would be difficult to move such huge blocks of stone anywhere and this must have been even more difficult at the time Stonehenge was built, almost 5000 years in the past. In any case, some of the stones were transported at least 200 miles. Maybe the old legends are true and the stone circle was really built by the wizard Merlin!

It is not difficult to believe that Stonehenge had a great importance in ancient knowledge. It took a great deal of know-how to build it both in terms of construction methods and astronomy. And in a society without writing, it certainly helped to preserve knowledge. Still, its scientific effect is tied to its time period. It doesn’t affect your science rate, it just gives you additional science. It’s up to you whether you turn it into real scientific research, better mining technologies, advanced military, or a more efficient form of government, or whether you let it disappear into the Dark Ages. Originally, we planned for that to be the only effect of Stonehenge. However, it became obvious that it was too beneficial in combination with the decay of time, so we also added a permanent effect – once you have a wonder that no longer has an effect, it’s an easy choice for the decay of time while the other civilizations suffer. So imagine that people have not forgotten the purpose of Stonehenge and still in later ages partially use its religious or healing effects. Until the decay of time comes, as it is still good fodder for this event. But that’s all right. Having a partially decayed stone circle in your civilization is good for tourism, as the British would surely tell you. 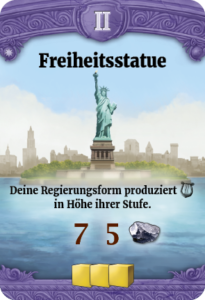 This famous American landmark was a gift of friendship from France to the United States. The base was designed and built by Americans, and the statue was built by French sculptor Frederic-Auguste and French designer Alexandre-Gustave Eiffel (yup, the same guy who designed the Eiffel Tower). The original goal was to have the statue completed by 1876 to celebrate the 100th anniversary of the Declaration of Independence, but since the statue itself was built in France transportation and assembly took some time (and strength). To be more specific, it was shipped in more than 200 crates and it takes over 4 months to assemble. Due to her positioning in Upper New York Bay, she was first intended to be a lighthouse, but the torchlight was not visible enough for that purpose. Now it is a national monument and its base houses a museum of its history. It was built to welcome the immigrants who came to the U.S. to start a new life and to this day it is the symbol of freedom and democracy. One last interesting fact: since 1916 it has been forbidden for the public to enter the Torch Balcony, but there is a live stream available for everyone to see the wonderful view from there.

It may not be obvious, but the Statue of Liberty is also a symbol of freedom and democracy in the game. The extra yellow markers represent not only the amount of new land that can be settled, but also the freedom and independence of the citizens – more yellow markers means you need less centrally produced food and entertainment. The extra culture depends on the level of your form of government – your democracy now produces an amazing 6 culture, but it works with other forms of government as well. It’s not hard to imagine how such a sculpture would look and be named in a communist country, for example. The Statue of Liberty was an obvious choice for a marvel. However, both its effect and its thematic classification overlap to some extent with the ocean liner, which is why it did not make the jump into the base game. In the expansion, however, the need arose for another wonder that provides population, which is why the Statue of Liberty returns here. During much of the playtesting, it produced one more culture than it does now, but that made it the strongest Age II wonder. Now it should be on par with the other wonders.