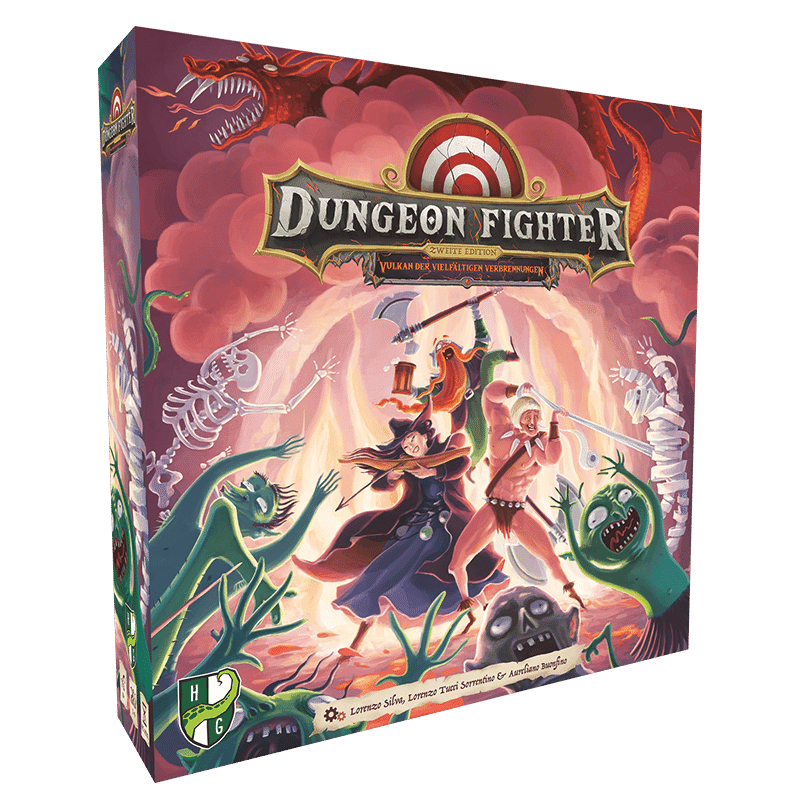 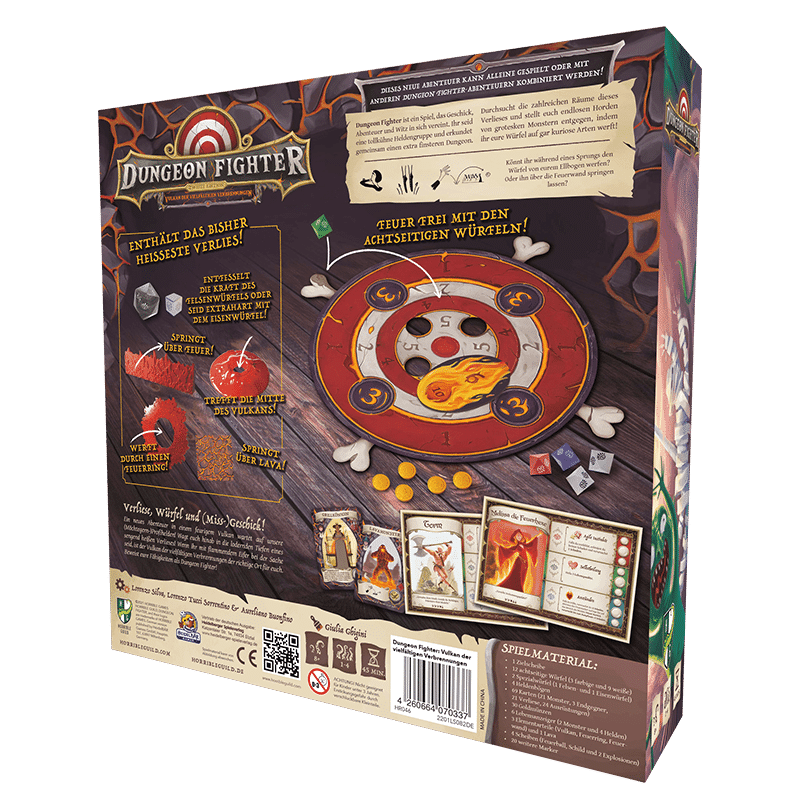 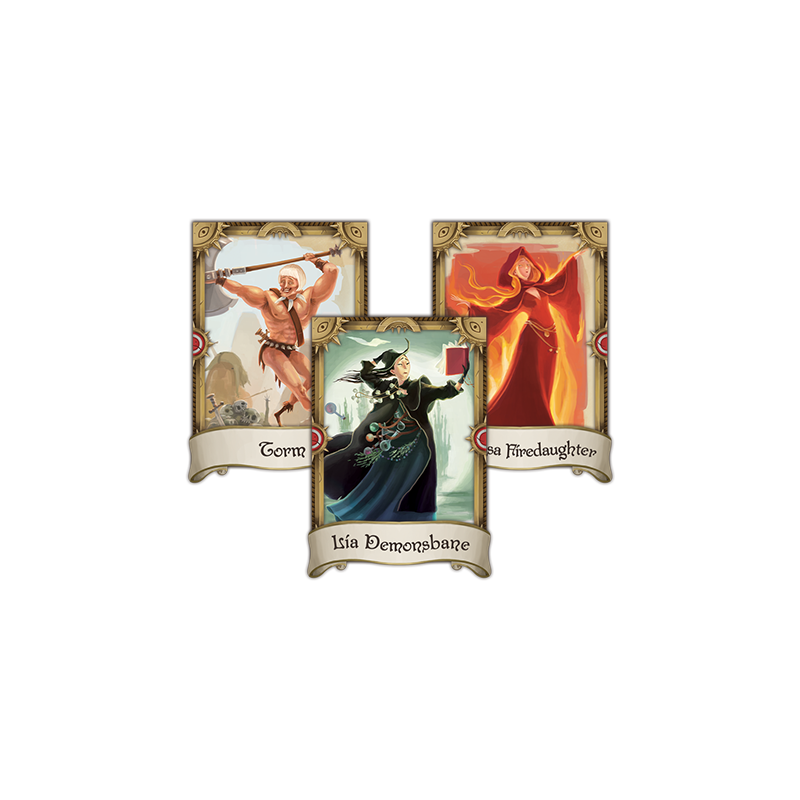 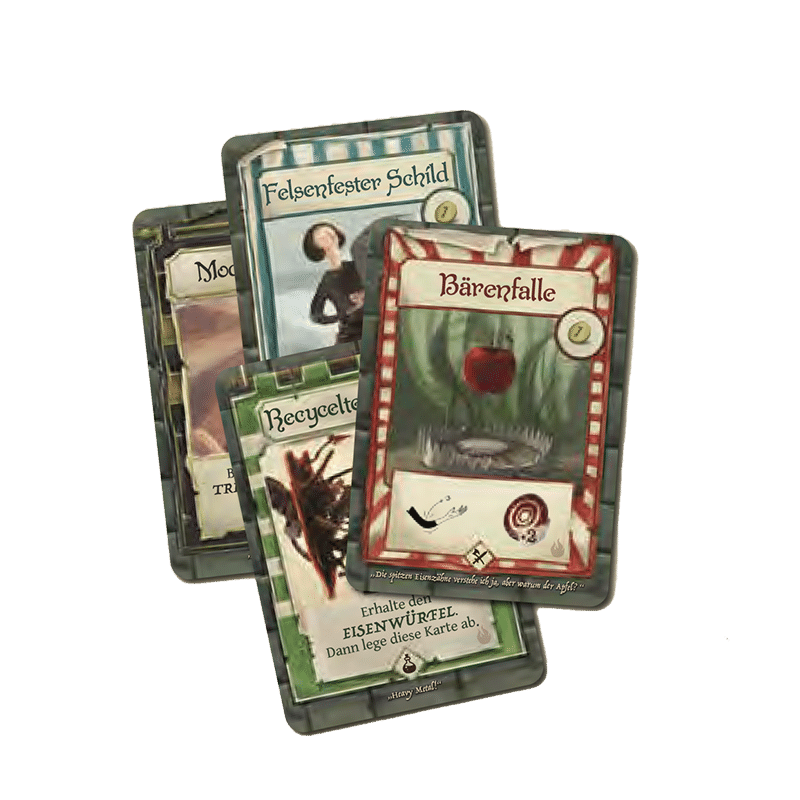 Your group of highly idiosyncratic heroes ventures into the blazing depths of an underground volcano. Will they be able to keep their cool amidst the flames of this blazing dungeon?

Dungeon Fighter is a whimsical skill game of a special kind, where you fight your way through a dungeon as life-weary complete losers…er…heroes.The COMPLETELY revised and expanded new edition consists of a total of 4 independently playable expansions with a special theme and game material. All four boxes offer a complete game each, but you can also take your favorite heroes, weapons and monsters to the next dungeon. (Put put put, here little monster!).

In Dungeon Fighter: Der Vulkan der vielfältigen Verbrennungen you have a choice of 6 heroes: The strong Torm who loves to show off his muscles, the knowledge-hungry Lia Demonbane, the fire mage Melissa Fire Daughter, and…. Your heroes have foolhardily (aka rarely stupidly) climbed into a volcano to fight terrible monsters like the well-read orc, the nightmare, the thing and the baby dragon together. You’ll get rewards for every victory – and nasty scars for every defeat, but let’s not think about that for now. And if you’re lucky, there’ll be a flying dungeon trader behind the next lava pool, selling you armor, weapons and fashionable hero knickknacks for a few paltry gold coins. Because of course you have to arm yourself to face the dam-dam-dam-dam…boss in the fieriest of dungeons. Here’s how these hot battles work: Whoever attacks rolls a die on the target. Yes, you read that right, here it is THROWN and NOT THROWED. Depending on where the die comes to rest, the hero does the indicated damage. And on top of that, the sides of the dice can trigger super cool special effects. So far so simple, but some monsters can only be caught at their weak spot and for that you’ll have to pull off a very special maneuver, like smashing the attack cube like a volleyball, throwing it while sitting on the ground, or throwing it up and blowing it in the right direction. Soon you’ll be skilled enough to use additional weapons that cause greater damage, but also require daring maneuver.

“See me leap through this circle of fire!” -Famous last words of a hero